Yes, There Are Shows I Like: "Edward Albee's At Home At the Zoo" and "Hangmen" 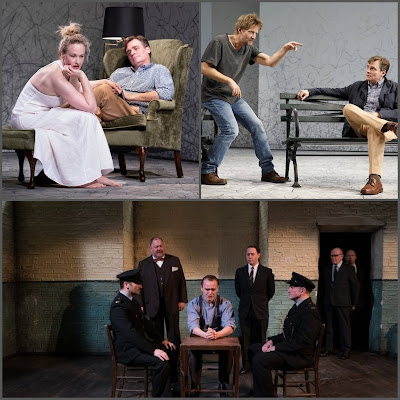 A couple of weeks ago, a friend remarked that most of my recent reviews have been negative. "Haven't you liked anything you've seen," she asked.

Well, yes I have. But since starting the Stagecraft podcast for BroadwayRadio, I've expressed my interest in the shows I most admire by interviewing their playwrights, as I recently did with Martyna Majok for queens, her timely play about the plight of women who immigrate to the U.S. (you can check out that interview here) and with Hammaad Choudry for An Ordinary Muslim, a gimlet-eyed look at the struggles of a Muslim family trying to adapt to contemporary life while remaining true to their cultural values (you can listen to that interview here).

Still, I don't want to gain a reputation as the Grinch of Show-Score (you can see my review ratings here) so below is one of my highlights-and-lowlights rundowns of two other shows I've seen over the past few weeks and liked a lot:

EDWARD ALBEE'S AT HOME AT THE ZOO: Albee was the third playwright to have an entire season devoted to his work by the Signature Theatre Company back in 1993 and Signature has been a home for him ever since (so much so that I often saw him in the lobby at the company's Pershing Square home before his death in 2016). The relationship continues with this awkwardly-named new show, a double bill of The Zoo Story, Albee's first produced play; and Homelife, a prequel he wrote 45 years later. Both are two-handers. In Homelife, a discussion between an affluent couple named Peter and Ann spirals into revelations about the perilous state of their marriage that both have tried to repress. The Zoo Story opens with Peter seeking refuge on a Central Park bench when he's interrupted by a talkative and slightly menacing guy named Jerry who becomes increasingly more volatile as their encounter goes on.
Highlight: The cast, under Lila Neugebauer's pitch-perfect direction, is superb. Paul Sparks brings a finely-calibrated mix of peevishness and unpredictability to the role of Jerry. And Katie Finneran, most familiar to me as a master comedienne, shows that she is equally deft at the drama stuff with her poignant portrayal of Ann. But the MVP is Robert Sean Leonard, whose role is the least flashy but the most essential and, in Leonard's fearless performance, the most devastating.
Lowlight: I don't know what costume designer Kaye Voyce was thinking with the distracting and inappropriate outfit she designed for Finneran's Ann. It's hard to imagine that an Upper East Side housewife spends her time cooking in a slinky white jumpsuit.

HANGMEN: British playwright Martin McDonagh is famous for his gallows humor but he gets literal with it in this entertaining black comedy about a famous executioner adjusting to the end of capital punishment in Britain. I'm something of a McDonagh agnostic but even I got a big kick out of this smart production which originated at London's Royal Court Theatre and has landed at the Atlantic Theater Company with several key cast members in tow and its tongue wiggling waggishly in its cheek.
Highlight: Director Matthew Dunster treats the play like an old-school farce and it's a luxury to watch 12 actors hitting every beat just right and without any of them burdened with the indignity of having to double. But the biggest kudos have to go to the sets and costumes by Anna Fleischle that are so witty they deserve a curtain call of their own.
Lowlight: The intentionally lower-class British accents, even from the American cast members, can be difficult to understand, which caused some grumbling, particularly from those already hard of hearing, at the performance I attended.
Both shows are playing only through March 25 (although there have been rumors that Hangmen might move to Broadway) and are largely sold out but if you love theater, you should do what you can to see them.

Labels: Edward Albee's At Home At The Zoo:, Hangmen