"A Letter to Harvey Milk" is Truly Sincere 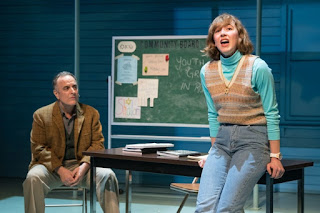 There is an unapologetic sweetness to the musical A Letter to Harvey Milk that won me over despite the many flaws of this show which opened this week in the Acorn Theatre at Theatre Row.

Based on a short story by Lesléa Newman, the feminist author of "Heather Has Two Mommies," it tells the story of a retired and widowed Jewish man named Harry who befriends a much younger woman named Barbara when he takes her writing course at his local senior center. But not to fear: this isn't yet another one of those May-December love stories.

The year is 1986 and Harry is still mourning the recent death of his wife Frannie and that of his friend Harvey Milk, the real-life gay activist and politician who was assassinated eight years earlier. Barbara has her own woes: she's a lesbian whose lover has dumped her and whose family rejects both her and the Jewish traditions she's always yearned to be a part of.

Each wants to ease the sadness in the other. In the process, secrets are revealed, the Holocaust is invoked, homophobia is confronted and 16 musical numbers are performed.

That's a whole lot to cram into 90 minutes but A Letter to Harvey Milk won the prize for "Best Promising New Musical" at the New York Musical Theatre Festival back in 2012. A follow-up professional production was delayed when its lyricist Ellen M. Schwartz died shortly after being diagnosed with cancer.

Composer Laura I. Kramer eventually recruited the actress Cheryl Stern (who also plays the ghost of Frannie) to help polish the lyrics. All three women are credited, along with Jerry James, for the book, which, perhaps because of all the hands involved, has the feel of something hammered out in a sitcom writers' room, complete with some wince-inducing one-liners. (click here to read more about the show's journey).

The score is pleasant but equally generic and unmemorable, although some of the lyrics are clever enough ("shanda," the Yiddish word for shame, gets rhymed with Rwanda) to elicit approving chuckles. The overall production is economically directed by Evan Pappas, a reflection of its clearly having been put together on a stingy budget.

So why, you might ask, was I won over?  Well, the performances by Adam Heller as Harry and Julia Knitel as Barbara are sincere and well sung. Michael Bartoli is a doppelgänger for Milk, who appears in several flashbacks. And while Stern's Frannie is a bit shticky and pitchy, she also provides a dash of Borsch-Belt high-spiritedness that gives the show a little ooomph.

But I think what most appeals to me about A Letter to Harvey Milk is the fact that this show isn't trying to be anything but what it is: an earnest ode to the beliefs that loss is a part of life and that love, even under the most difficult circumstances, is what makes it worthwhile.

Labels: A Letter to Harvey Milk