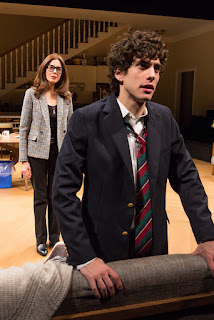 Race has long been—long as in ever since white settlers arrived in the New World, took territory from the natives and then imported enslaved Africans to work that land—a divisive issue in this country. Which may be why playwrights (at least white ones) avoid writing about race. So Joshua Harmon deserves credit for jumping into the thicket of it with Admissions, which has just been extended at Lincoln Center's Mitzi Newhouse Theater through May 6. And I'm going to applaud his chutzpah even though I can't totally champion his play.

Its title is a triple word play because the main character Sherri is the liberal-minded admissions director at a New England prep school; her own son Charlie is in the process of applying to his dream college, Yale; and, before the 105-minute play ends, all kinds of uncomfortable confessions will be made.

Sherri, played with her usual fine-grained finesse by Jessica Hecht, is inordinately proud of the fact that she has tripled the enrollment of students of color at the school from 6% to 18% in the 15 years she's been on the job and she's determined to raise the number even higher. But both she and Charlie are severely shaken when Charlie doesn't get into Yale but his best friend, a mixed-race kid named Perry, does.

Perry never appears. Nor does his black dad. Instead, Harmon has Perry's white mother, who also happens to be Sherri's best friend, make the case for her son's Ivy League worthiness.
Some critics have chastised the playwright for leaving out the black characters but I found it refreshing to see a group of white people grappling with the complications of race, privilege and how to distribute opportunity more equally, topics that the theater usually leaves to people of color to deal with. I just wish Admissions had dealt with it all better.

After setting up the situation, Harmon and his director Daniel Aukin forgo plot and just allow the characters to step up onto metaphorical soapboxes and spout their beliefs, anger and feelings about being treated unfairly (click here to read an interview with the director). Charlie actually gets to give a 15-minute diatribe that's supposed to reveal how even the most progressive whites will reach for the race card when they feel they've been dealt a bad hand.

People at the performance I attended broke into applause at the end of his monologue. But it sounded to me as though Harmon hadn't combed through all of the arguments he was trying to make (somehow both Willa Cather and Penelope Cruz get thrown into the mix) or was nervous about taking too firm a stand. So I wasn't sure what my fellow audience members were clapping for, unless it was in admiration of the actor Ben Edelman's having learned so many lines.

But what really distressed me is that this is the second show I've seen over the past month that danced up to a hot-button topic (the other was MCC's Relevance which tangoed with feminism) and then danced away just as quickly before it got burned. As my grandmother used to say, if you can't stand the heat, stay out of the kitchen.