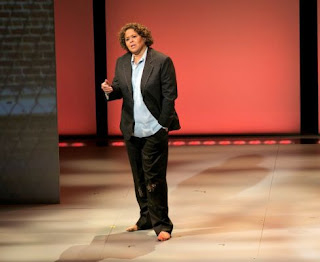 One of the many things this week's election has revealed is that people in this country have very different beliefs about some very important subjects but tend to talk almost exclusively to people who agree entirely with them.

I sensed that same preaching-to-the-choir quality in the new one-woman shows Notes from the Field and Sell/Buy/Date. Each deals with a really big issue but does so in a way that's likely to have blue staters nodding and red staters sneering.

Anna Deavere Smith is the creative force behind Second Stage Theatre's production of Notes from the Field, which makes the argument that failing schools push poor kids—especially those black, brown and male—into a downward spiral that can end in prison or sometimes death at the hands of police officers.

Smith is no stranger to tough subjects. Her breakthrough show Fires in the Mirror chronicled the 1991 clash between blacks and Jews in the Crown Heights section of Brooklyn. It was followed by Twilight: Los Angeles, 1992, an account of the violent response to the acquittal of white cops who had been videotaped beating the black motorist Rodney King.

As she did with those shows, Smith has interviewed scores of people about her subject, excerpted some of their comments and, working with her frequent collaborator director Leonard Foglia, transformed what they said into verbatim performances that invoke the speaking style and mannerisms of each person.

She says she talked to over 250 people for Notes from the Field (click here to read more about her process) and the resulting 2-hour-and-15-minute show offers up observations from 17 of them who include a multicultural assortment of parents, school teachers, journalists, advocates and the civil rights icon Congressman John Lewis.

That's an impressive and often moving roster of witnesses but while the stories they tell are compelling, they fail to add up to a sustaining narrative or to offer any fresh insights.

Smith began working on this project long before the rise of the Black Lives Matter movement but she has clearly drawn inspiration from it. Interspersed with the monologues are video projections assembled by Elaine McCarthy that show incidents such as the police officer's violent removal of a black girl from a high school classroom in Columbia, South Carolina.

Most of us have seen these videos before but they still pack a visceral punch that is underscored by the comments in the monologues and the musical improvisations of the bassist Marcus Shelby.

And as always, Smith, moving from one character to the next with the help of small costume changes devised by Ann Hould-Ward, throws herself into her impersonations, seeming to particularly enjoy the impassioned oration of the minister at the funeral of Freddie Gray who died after being detained by the police and whose death sparked days of turmoil in Smith's hometown of Baltimore.


Some audience members at the performance my theatergoing buddy Bill and I attended were so moved that they burst into cheers. But missing for me were the subtleties and complexities Smith offered in her earlier shows. Why, for instance, aren't cops given their say in this piece?

Instead, everything here is etched in black and white. Then the show ends on a "Kumbaya" moment that doesn't seem earned or, given the current political climate, likely.

The spotlight moves from race to gender in Sell/Buy/Date, which was created and is performed by Sarah Jones, who made her name with the 2004 show Bridge & Tunnel, in which she portrayed a group of fictional New Yorkers, diverse in age, race and gender but all participating in a poetry slam.

For this show which is currently in Manhattan Theatre Club's small black box theater at City Center, Jones too has gone the interview route. Having spent several years talking to female sex workers around the world, she has adapted those conversations into a series of monologues that are presented as part of a lecture given by a women's studies professor toward the end of the 21st century.

But the message they're supposed to be delivering isn't as successful. And a melodramatic subplot about the professor's pending promotion and her uneasy relationship with her mother merely distracts from the main subject.

Jones is clearly serious about that subject. She's larded the narrative with stats and other bits of information about the link between prostitution and the work available to poor and uneducated women. And inserted in the Playbill are lists of books and articles on the subject, movies and Ted Talks to watch and violence-against-women groups to support.

But Jones is also eager to entertain and, under Carolyn Cantor's light-handed direction, her vignettes are bubble-wrapped in humor (click here to read about their process). Jones has a quick imagination and a sly wit. It's hard not to laugh when a feminist studies major holds pole-dancing parties under the rubric "Don't Get All Pole-mical."

And it wasn't clear what Jones wanted me to feel, other than outrage that women are oppressed, which seems again, like preaching to the converted. Although two men did walk out during the performance I attended. Without breaking character, Jones noted their exit and told them they'd still have to turn in the class homework.

And that may be the problem with both shows. They feel like homework, albeit assigned by very entertaining professors.

Labels: Notes from the Field, Sell/Buy/Date