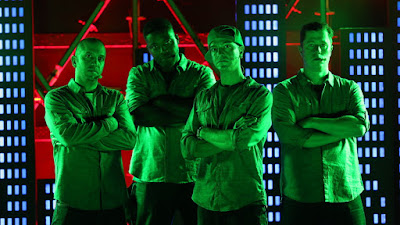 Intentionally or not, most shows that make their way to Broadway or the major off-Broadway stages are geared for people who usually go to the theater. Which usually means you get a lot of stuff about the problems of well-off white folks or based on the books ("Pygmalion" and "Anna and the King of Siam") music (jazz or classic rock) and old plays (Shakespeare, Chekhov, Ibsen) that those folks most appreciate.

So one of the truly great side effects of Hamilton's phenomenal success is the new willingness of more and more producers and artistic directors to experiment with shows that might never have made it onto a mainstream stage.

Hip-hop was the dominant music when the twenty and thirty-year-olds who are beginning to make noise in the theater were growing up and, like Hamilton creator Lin-Manuel Miranda, they're bring its aesthetic right along with them. In just the past week, I've seen—and really  enjoyed—three shows that use rap music, multi-ethnic casts and creative choreography to tell stories ranging from a Shakespeare classic to a history of Sixties radicals.

They're not to everyone's taste (a good friend told me she walked out of one of them) but I love that they're bringing new energy to our stages and may bring in some new audiences too. Here's more of what I thought about each of them:

OTHELLO: THE REMIX, a retelling of Shakespeare's tragedy, playing at the Westside Theatre through March 15.

The Story: In this version, Othello is a Jay Z-like record producer who raises the ire of a hardcore rapper named Iago when he gives the spot the rapper coveted on an upcoming tour to a pop singer named Cassio. Iago pays his boss back by falsely insinuating that Cassio is having an affair with Othello's wife the singer Desdemona and... well, you know the rest.

The Staging: Gregory James Qaiyum and Jeffery Ameen Qaiyum, the Pakistani-American brothers known as GQ and JQ, wrote, composed and directed the show, which has been boiled down from a typical three hours to just 80 minutes. They've converted the remaining dialogue into rap couplets, a lot  of them quite clever and all performed to beats spun by DJ Supernova, who is already onstage working his turntable when the audience enters and stays there throughout the show.

The four-man cast zips around the stage, rapping, performing synchronized dance routines and playing all the parts, signaling their role changes by Velcro-ing on bibs decorated in the style of each character, with the exception of Desdemona, who appears only as an elusive recorded voice.

The Bottom Line:  Purists will miss the Bard's language but others will probably get a kick out of this high-spirited production. And even in the midst of all the zaniness, Postell Pringle still manages to convey Othello's nobility and his folly. 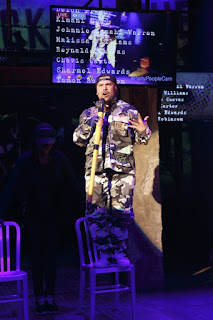 PARTY PEOPLE, a history of the Black Panther Party and the Young Lords devised by the theater collective known as UNIVERSES and playing at The Public Theater through Dec. 11

The Story: The millennial offspring of activists from the '60s organize a reunion for members of the Panthers and the Young Lords and in the process examine the legacy—good and bad—of those groups as well as the responsibility of today's young people who seek social justice.

The Staging: Director Liesl Tommy, herself the child of activists in her native South Africa, uses every theatrical device she can find to recreate 40 years of history: news footage is played on the screens hung all around the Public's Anspacher theater, songs from Spanish boleros to hip-hop boasts are performed, dance routines range from line dances to militaristic marches, a tribute is given to people killed in the struggle and a condemnatory shout-out is lobbed against Donald Trump.

A mostly excellent cast of black, brown and white actors, lead by longtime UNIVERSES members Willie Ruiz, Mildred Ruiz-Sapp and Steven Sapp, portrays a full panoply of characters that include the grieving widow of a white cop shot by the Panthers, a black infiltrator who betrays the party, the committed foot soldiers who created free breakfast programs for poor kids, the paranoid ones who turned to drugs and violence against their own and the children who felt abandoned when their parents placed the needs of the people ahead of the needs of their own families.

Bottom line: At nearly three hours, the show could use some pruning and yet there are many moments of sheer exhilaration, particularly for people unhappy with the current political situation.

VIETGONE, a story about Vietnamese refugees adjusting to life in the U.S. that is playing at Manhattan Theatre Club's City Center Stage I through Dec. 4.

The Story: Playwright Qui Nguyen, artistic director of the Vampire Cowboys Theatre Company, based this comic romance on the experiences of his parents who met in a relocation camp in Arkansas after fleeing Vietnam when Saigon fell and the Americans left in 1975.

The Staging: The setting is the past but, as in Hamilton, the vibe is totally contemporary. Graphic novel-style video projections are employed to indicate different locales. Characters break into soliloquies delivered entirely in rap verse. Stereotypes are constantly turned on their heads. The Vietnamese characters speak hip—and profanity laden—English, while the white characters mumble an almost incomprehensible pidgin English. Women usually portrayed as docile are sexually aggressive. And, layering real substance underneath all the hijinks, views of the 20-year-long war are similarly upended.

Bottom line: The AARP-aged couples on both sides of me left at intermission but the two hours and 20 minutes whizzed by for me and I can't wait to see what Nguyen does next.