Politics as a Blood Sport in "Coriolanus" 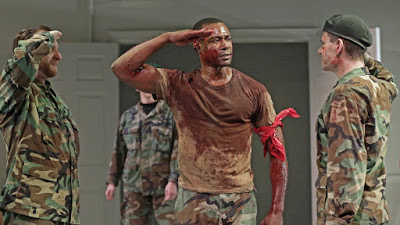 The presidential campaign that will finally end on Tuesday has been particularly ugly but as the Red Bull Theater's kinetic—and often bloody—production of Coriolanus reminds us, politics is rarely pretty.

The play is the last tragedy Shakespeare wrote and he based it on the life of Gaius Marcius Coriolanus, the Roman general, who, legend has it, was so ruthlessly victorious on the battlefield that the city's infatuated citizens urged him to run for counsel and then fatally turned against him when his policies prove equally ruthless at home.

The Red Bull production jumps right into the midst of that chaos when a mob of Roman citizens, all in modern dress, rush into the aisles at the Barrow Street Theatre, where the show is playing through Nov. 20, carrying signs and bellowing for an end to the grain shortage that has fallen hardest on the poorest of them.

Director Michael Sexton has trimmed the play and the dialog sounds as though he's also contemporized the lines. I don't remember seeing Coriolanus before so I can't make a true comparison but I didn't hear much of the Bard's usual poetry or any memorable quotes.

Still, the production works on its own terms. Sexton uses all kinds of stagecraft to push the comparison to today's politics—or what they could lead to. At one point, some audience members are given ballots and allowed to vote in the consul election before that process is emphatically halted.

And although Sexton has assembled a cast with diverse acting styles, he's found a way to meld them into a potent force. Dion Johnstone, a Canadian actor whose bio includes a lot of Shakespeare, is as virile and commanding a Coriolanus as one could imagine.

The always-worth-seeing Patrick Page brings a southern twang to Coriolanus' ally Agrippa that somehow seems just right for this behind-the-scenes operator. Meanwhile, Lisa Harrow plays the general's scheming mother Volumnia with old-school hauteur. The rest of the cast is young, energetic, racially diverse and even includes a visibly pregnant woman in a traditionally male role.

But the moral of the tale remains the same as it was in Shakespeare's day: beware strongmen in politics.