"Hamilton" Really is a Revolutionary Show 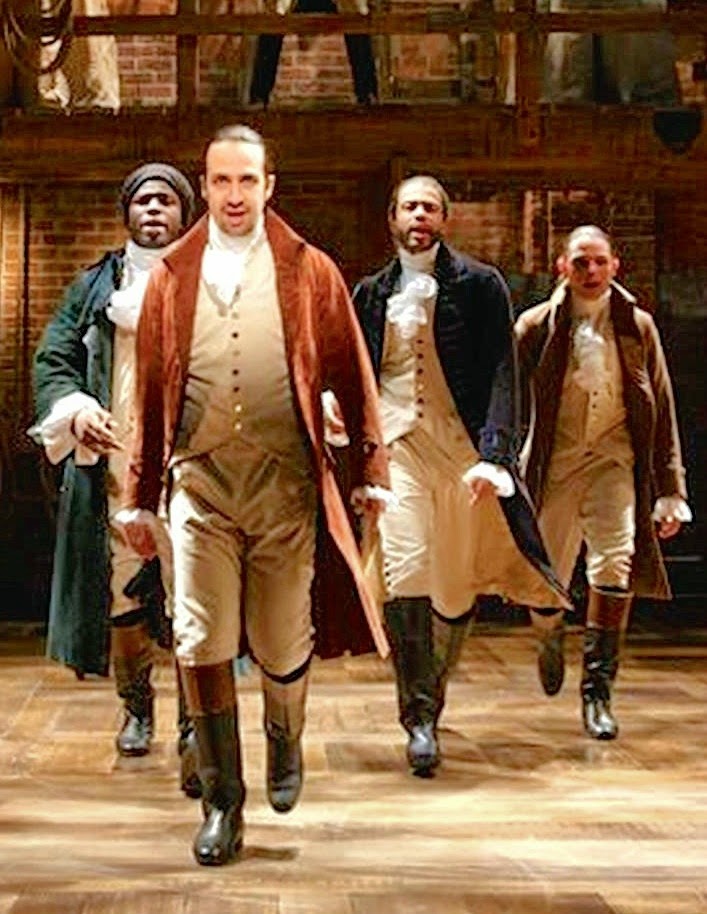 If you care anything about musicals, you must have heard by now about Hamilton, the everybody’s-talking-about-it show that’s playing down at The Public Theater (even David Brooks the Times political columnist has chimed in; click here to read what he said). So all I can really add is this: believe the hype. For this is the most exciting musical, exciting show of any kind, that I’ve seen in a long time.

All of this is a little surprising because Hamilton is a bio musical about Alexander Hamilton, one of the country’s lesser-known Founding Fathers. Now it’s true that his face is on the $20 $10 bill but, at least until now, he hasn’t had the rep of a Thomas Jefferson or Benjamin Franklin.

On the other hand, the hoopla isn’t all that surprising because the show was created by Lin-Manuel Miranda, who like Stephen Sondheim has been, and Jonathan Larson might have been had he lived, is a game-changer who possesses  all the right stuff to revolutionize the American musical.

As he did with his Tony-winning debut show In the Heights, Miranda has mashed together hip-hop and other contemporary sounds with the traditional aesthetics of the Broadway musical. And this time out, he’s added a story that has both intellectual and visceral heft.

The musical is based on Ron Chernow’s 2004 biography of Hamilton, who was born in the West Indies to unwed parents, orphaned as a boy, immigrated to America, got caught up in the revolutionary fervor, became the senior aide to George Washington during the war, wrote most of The Federalist Papers that helped shaped the U.S. Constitution, founded The New York Post, became the first Secretary of the Treasury and was infamously killed in a duel by his erstwhile friend Aaron Burr before he was 50.

That clearly gives Miranda a lot to work with. And he flies with it. What’s most impressive about his version of Hamilton (Miranda not only wrote the book, music and lyrics but plays the title role) is that it reminds you how young the country and the men who made it were (Hamilton was about 19 when the war began) when they went up against the greatest power in the world—and, of course, won.

The play bristles with that same kind of audaciousness. The music is fresh and ingratiating and the lyrics, both rapped and sung, are piquant and insightful.

The fact that nearly all the Founding Fathers, including George Washington, are played by actors of color strips off the moldiness that usually clings to bio-shows. Every move these rebels make declares that this country is for all of us (click here for a New Yorker profile that describes how Miranda conceived the show).

And the moves are fantastic. Miranda works once again with director Thomas Kail and choreographer Andy Blankenbuehler. Both have done other shows with varying degrees of success but they seem hyper-energized when they’re working on Miranda’s. The stagecraft here is inventive and witty and the dancing somehow manages to be both of Hamilton’s time and ours.

The entire 24-member cast is equally fine. It’s ridiculous to single anyone out cause they’re all so good but Renee Elise Goldsberry, always a smart and sympathetic actress, out does herself as Hamilton’s sister-in-law and confidante, a woman as fearlessly intelligent as he is but also prudent where he's rash.

Meanwhile, Brian D’Arcy James was a scene-stealing hoot as Britain’s foppish King George. James, who apparently assumed the run would be a short one, is leaving the show next week to begin rehearsals for the upcoming Shakespeare-era musical Something Rotten! and leaves behind big shoes to fill.

The announcement came just yesterday that Hamilton, which is pretty much sold out downtown, will open on Broadway this summer. Some observers had speculated that the show would try to take advantage of all the praise it's been getting (click here to check out some of those raves) and rush in before the season ended to make a run at the Tonys. But the later opening will give Miranda and his cohorts time to continue tinkering (the show feels a bit long) but without losing too much of its current momentum.

It will also give some other rumored frontrunners like Fun Home (another Public production) and Something Rotten! their time in the limelight and a better shot at the Best Musical Tony.

It’s the kind of less than perfect compromise that the Founding Fathers, who, of course, debated hotly over their young nation's positions on issues like slavery and monetary policy, would understand—and maybe admire.

And oh, I got so excited about Hamilton, that I almost forgot to announce the winner of last week’s giveaway of two free tickets to the also worth-seeing new play Rasheeda Speaking.

The lucky guy is Larry Bloch, who got the right answers to my questions about which previous awards had been won by the show's stars Tonya Pinkins (a Tony for Jelly's Last Jam) and Dianne Wiest (Oscars for "Hannah and Her Sisters" and "Bullets Over Broadway.")  Kudos to him too.