Only A Tepid Round of "Applause" 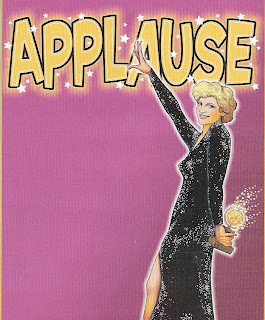 Is there anyone who loves theater who doesn’t love “All About Eve”? As I’ve written before, that classic backstage drama is my all-time favorite movie. Everything about it — Joseph L. Mankiewicz’s brilliant, quip-filled script; the high-octane cast (Bette Davis, Anne Baxter, George Sanders, Gary Merrill, Thelma Ritter, Celeste Holm, and even a cameo by Marilyn Monroe); its bittersweet view of the theater — is gloriously bitchy and I’ve lost count of how many times I’ve seen the film. When show business writer Sam Staggs’s history of the movie, “All About ‘All About Eve,’” came out a few years ago, I bought the book, read it straight through and then read it again.

So, I don’t know how I missed seeing Applause, the musical adaptation of the film, when it opened on Broadway in 1970, went on to win Tonys for Best Musical and for its star Lauren Bacall and then ran for over two years. All of which explains why I was thrilled when I learned that Applause was going to be the first of this season’s Encores! productions of semi-staged concert versions of old musicals. My pit-musician husband K is a member of the Encores! orchestra and so my friend Bill, who did see and remembers well the original production, and I went to the invited dress rehearsal at City Center on Wednesday. It was, to quote the most unforgettable line from the movie, “a bumpy night.”

The now-familiar story of the relationship between a devious ingénue and an aging stage actress was based on a real-life incident that the actress and writer Mary Orr turned into a short story that "Cosmopolitan" magazine published in 1946. It was adapted into a radio drama in 1949; made into the movie that is widely considered to have revived Davis’s career in 1950; and two decades later, became the musical that made Bacall a Broadway star. Now, Christine Ebersole has taken on the role of the aging actress Margo Channing in the Encores! production.

As she proved in last year’s Grey Gardens, it’s hard to find a more consummate stage actress than Ebersole. She also has that incredible singing voice. And, as she’s currently demonstrating, she's also got the soul of a true stage trouper. For Ebersole is performing the show’s five-day run, which ends Sunday, while struggling to recover from a bout of flu that kept her in bed for three days and that had her only able to walk through the technical rehearsal on Tuesday. She gamely, if hoarsely, sang on Wednesday but K tells me she's still not well. So it’s going to sound particularly mean to say this, but here goes: she’s wrong for the role.

It makes sense that actors are eager to do parts that will offer new challenges, allow them to stretch beyond what they’ve done before and already mastered. Sometimes it works (song and dance man Raúl Esparza as the no-nonsense pimp in Harold Pinter’s The Homecoming) and sometimes it doesn’t (the powerful actress S. Epatha Merkerson as the fragile wife in Come Back, Little Sheba). Part of what has always made the role of Margot Channing work is having her played by a female star whose own personality is as outsized as the fictional character’s. Ebersole lacks the imperiousnes that Davis and Bacall brought to Margot. She’s too nice. I kept wondering what Donna Murphy, an actress who knows how to wield big shoulders, might have done with the part.

And Applause needs a star who is larger than life because Charles Strouse’s music isn’t his best and the show comes off as a dated artifact from the ‘70s despite director Kathleen Marshall's effort to add modern touches, including an homage to other Encores! musicals she's embedded in the title song number. Meanwhile all of the actors, with the exception of Kate Burton as Margot’s best girlfriend, seemed muted. Erin Davie’s Eve wasn’t ruthless enough. Michael Park as Margot’s director and lover wasn’t dashing enough. Tom Hewitt as the producer who becomes Eve’s mentor wasn’t cunning enough. Even Mario Cantone as Margot’s gay dresser and closest confidante, tuned down his usual high camp.

Ebersole, of course, is too good to give a bad performance. But this show, even more than most, rides on the strength of its star and even if Ebersole had been in full health, I’m not sure she could have carried it.

Thanks for the eagle-eye, Jon. Will move her from the troop to the troupe right now.

Donna Murphy is one of the most powerful and talented women on the American stage today. So is Christine, so perhaps her illness has affected her performance.

Anonymous, you're right: they are both terrific talents and I look forward to the productions to come that will allow each one to shine as only she can. In the meantime, thanks for your comment.

Anonymous, you're right that actors can interpret parts differently and it can be fascinating to see such variations, but, alas, this one didn't work for me. Still, I'm glad you enjoyed it and grateful that you took the time to say so.