A Lazy "Sunday in the Park With George" 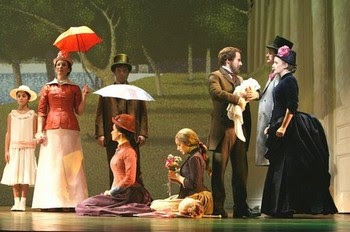 There’s a reason they call a musical a musical: it’s because of the music. It’s kind of like an ice cream sundae—you gotta have the ice cream. The book of a musical, particularly if it’s good, is like chocolate sauce: it turns a bowl of ice cream into a real treat. The choreography, sets and costumes are the whipped cream, nuts and cherry that help to dress it up. But the whole thing starts with the ice cream and, at the risk of really overworking this metaphor, when I get a sundae, I don’t want it with low-fat ice cream. That’s how I feel about musicals too—I want a big orchestra and full orchestrations.

All of this explains why, despite Stephen Sondheim’s exquisite score, James Lapine’s Pulitzer Prize-winning and moving book, nice performances from the British actors Daniel Evans and Jenna Russell who recreate the roles that won them Olivier Awards in London, and some of the best reviews of the season, I was disappointed with the Roundabout Theatre Company’s new production of Sunday in the Park With George, the latest in a chain of low-calorie musicals that have been imported from England.

Back in the late 1980s and early ’90, the Brits were famous—or infamous, depending on how you felt about it—for gigunda spectacles like The Phantom of the Opera and Miss Saigon. But in recent years, they’ve boomeranged in the other direction with shows like director John Doyle’s revivals of Company and Sweeney Todd in which the actors double as the orchestra. The actors don’t play instruments in Sunday in the Park With George but I almost wish they did since there are more of them than the five members in the show’s band.

Trend watchers have labeled such shows minimalist musicals. I call them cheap shows. O.K., I fess up to a certain bias that comes from being the wife of a pit musician. But, as I said, there’s a reason they call these shows musicals. And Sunday in the Park With George may be one of Broadway’s most important musicals. Sondheim wrote it after the painful failure of Merrily We Roll Along, when he was discouraged by the seeming inability of Broadway audiences to appreciate innovative approaches to his art form. He teamed up for the first time with Lapine (they would later go on to collaborate on Into the Woods and Passion), a young writer-director who had made a name for himself in the freer, innovative off-Broadway musical sandbox at Playwrights Horizons.

The show Sondheim and Lapine came up with is a meditation on what it takes—and what it costs—to be an artist. The first act centers around a fictionalized version of how the 19th century French painter Georges Seurat created his masterpiece ”A Sunday Afternoon on the Island of La Grande Jatte,'' the scene of a verdant spot in the middle of the Seine that Parisians of different classes visited on weekends. The second act takes place nearly 100 years later when Seurat’s namesake great-grandson, an American multimedia artist, is trying to find his way in the contemporary New York art world.

One of the things that seems to have wowed the critics about the current production is the decision by its 32-year old British director Sam Buntrock, who has worked as a commercial animator, to use video projections to create the show’s sets, including the recreation of Seurat’s painting that has always been the emotional centerpiece of the show. The video images are smartly done and fun to see but they struck me as no more than high-tech versions of the clever cutouts and pop-ups that Lapine, who also directed the original production, and set designer Tony Straiges came up with over 20 years ago. And, of course, sets can’t compensate for the music or, as a friend once said, “they don’t call it a setsical.” The voices, particularly Russell’s, do justice to Sondheim’s music but the orchestra isn't powerful enough to hold up its end.

I also found myself missing the intensity and idiosyncrasy that Mandy Patinkin and Bernadette Peters brought to the roles of Seurat and his mistress Dot in the first act (click here to listen to Peter's version of the title song and click here to compare Russell's version of the same number) and the younger George and his grandmother Marie in the second. So, last night, I watched the DVD of the original production that aired on PBS back in 1986. (I had treated myself to the must-have 6-disc "Sondheim Collection" set last year.)

Sunday in the Park with George isn't easy (the woman sitting next to me at Studio 54, where the new revival is playing, slept during the first act, woke up during intermission to chat with her husband, the presumed fan in their family, and then went right back to sleep during the second half). But the songs, particularly in the much debated modern half, are sumptuous, Patinkin and Peters are marvelous and the orchestra is gloriously full-calorie strength. There’s also a commentary track on which Sondheim, Lapine, Patinkin and Peters reminisce 15 years later about putting the show together. It’s all thoroughly satisfying.

Labels: Sunday in the Park With George

Thanks for your review, a definite departure from most of the NY critics. I'm seeing the show in 3 weeks, loved the original, and suspect that I'm going to feel the same way you do. What's a musical without those lovely, lush orchestrations?

Dylan, thanks so much for reading and for your comment. Please post again after you've seen the show and let me know what you think.

I've always found the PBS version of "Sunday..." a mixed bag. Glad they captured the performance, but the camerawork is excessively busy. I wonder how much is lost on people who see it in that format without having seen the stage version.

I sympathize with you, Jon. The dilemma for any director assigned to film a stage production is whether to just pull back and film the goings on as though the camera had a seat in the audience or whether to use close-ups, pans and other techniques that viewers tend to expect from the film medium. Either is an inadequate substitute for being there but better than nothing and, at the least, a way to preserve at least a bit of the magic.

I saw the same show you did. It was completely frustrating and disappointing. As an animator, I hate to say that I thought the animation was intrusive, but it was. The show tried too hard to distract your attention from what was going on in the story, and the small synthesized "orchestra" didn't help. Thanks for your review; I would've screamed if it had been one more glowing accolade.
Having seen the original several times, I missed feeling ANYTHING for these characters.

Thanks so much for commenting, Michael. I particularly appreciate your point of view as someone who knows animation. If you haven't seen it yet, I think you might find this Friday's column by the New York Post theater columnist Michael Riedel interesting. He reports that the show's director Sam Buntrock was so preoccupied with the technology during rehearsals for the revival's original production at London's fringe theater the Menier Chocolate Factory that the cast nearly mutinied. You can read the story here: http://www.nypost.com/php/pfriendly/print.php?url=http://www.nypost.com/seven/02292008/entertainment/theater/the_savior_of_sunday_99707.htm

It's nice to know I'm not the only one who felt that it was kind of lacking. It feels like all the attention went to the shiny animation, and the music (and acting) were neglected. The acting wasn't bad or anything, of course, but it was a bit subdued, and ended up being quite overwhelmed by the spectacle of the set. And if that had been my first introduction to the music, I doubt I'd remember any of it now.

Good Afternoon!!! www.broadwayandme.blogspot.com is one of the most excellent informational websites of its kind. I enjoy reading it every day. Keep it that way.