"English" Has Some Valuable Things to Say 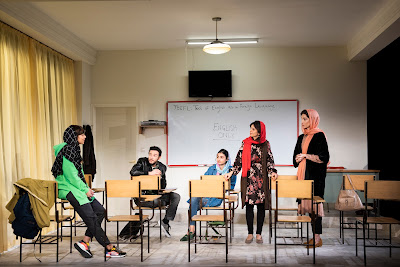 There have been so many voices absent from the American stage that sometimes we don’t even know what we’ve been missing until we suddenly hear it. English, the deceptively simple play by Sanaz Toossi that opened at the Atlantic Theater this week, perked up my ears in all kinds of ways.

The play is set in 2008 in an English-language school in the Iranian city of Karaj. For the sake of the play's narrative, each of the four students in the class has a conveniently different reason for wanting to speak English.

Teenage Goli is just fascinated by it. While middle-aged Roya is being forced to learn it because her grown son living in Canada won't allow her to see his children until she can speak to them in English rather than Farsi.

And, of course, each student has a different facility for learning English. Omid, the only male in the class, is almost totally fluent with only the mere trace of an accent but has his own reasons for taking the class. Elham, who has been admitted to medical school in Australia, is frustrated that she can’t seem to master the language despite her obvious smarts.

Their teacher Marjan, a former émigré who has returned to Iran after living in England for nine years, insists that only English be spoken in class, even as her own comfort with the language is starting to fray. The interactions between her and her students unspool in a series of brief scenes that represent their class sessions over the course of a semester.

All of their struggles with English become a stand-in for the ways in which the languages we speak shape our sense of who we are in the world, how others see us and how we see ourselves.

Toossi, the California-born daughter of Iranian immigrants; and her director Knud Adams, who spent his first 15 years living in Europe, have smartly constructed the play so that the characters speak haltingly and with accents when they’re supposed to be talking in English but speak fluent and totally accent-free English when the script calls for them to lapse into their native Farsi.

The entire cast—all seemingly of Middle Eastern descent—is excellent. However what got to me is the play’s reminder that the way so many newcomers in this country speak English often gives such a false sense of who they truly are.

But the part that really got me was the way Toossi crafted both her story and her dialog to upend stereotypes about Muslims, particularly Muslim women.

Her female characters are devout and irreverent. They smoke and flirt and cuss up a storm when they’re speaking in their native tongue. In short, they’re just human beings instead of symbols.

And it’s so refreshing to have their stories told without the overhang of terrorism or the other devastations that tend to pop up in plays and films about people from their part of the world. To have these different tales told by someone who has an insider's sense of that experience—and without having it fractured through the gaze of what outsiders think it to be—is a joy in itself.

Focusing on the personal stories amidst political events is already a trademark for the 30-year-old Toossi who only completed her M.F.A from NYU four years ago (click here to read more about her).

Another of Toossi's plays Wish You Were Here (which is scheduled to open at Playwrights Horizons in April) was inspired by her mother’s experiences and centers around a group of female friends who live through the Iranian Revolution of 1979 and its aftermath.

Here again, the usual tropes about women being forced to change their dress and give up their jobs or their studies are moved into the background, while the play’s main narrative—which includes four weddings and an almost funeral— deals with the friendships between the women. It debuted two years ago as part of the Williamstown Festival’s audio season that you can still listen to on Audible.com by clicking here.

Neither of Toossi’s plays is perfect.  She’s still a young writer.  But she is clearly a talented one who is adding an important voice to the American theatrical conversation. And now having heard it, I’m eager to hear more of what she has to say.