"Black No More" is a Little Too Pallid 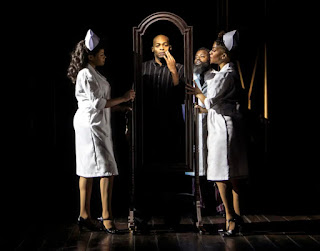 Even before it opened at the Pershing Square Signature Center on Tuesday, some people were calling the musical Black No More “the new Hamilton.” And it’s easy to see why.

The score, much of which is credited to Tariq Trotter—who is also known as Black Thought, the co-founder of the famed hip-hop band The Roots—is a grab bag of hip-hop, blues, R&B, gospel and Broadway showtunes, similar to the mix Lin-Manuel Miranda put together for his musical.

The choreography by Bill T. Jones keeps dancers vigorously whirling around the stage as though paying kinetic homage to the animating movements Andy Blankenbueler brought to Hamilton. Even Derek McLane’s scenery, what little there is of it, evokes the erector-set aesthetic that David Korins constructed for Miranda’s award-wining hit.

But Black No More is likely to be a much tougher sell.

Its story is based on a 1931 novel by the Harlem Renaissance writer George S. Schuyler that was controversial even in its day. A satire on American racial relations, it pivots around a machine that can turn black people into white people.

The first person to undergo the process is a young guy named Max Disher who wants (1) to live without the restrictions that his skin color imposes on him and (2) to hook up with a white woman named Helen that he met at a Harlem night club (don't get me started on how problematic the latter is).

The transformation starts out smoothly but soon so many black people are signing up for the treatment and abandoning their former identities that the black culture of Harlem is threatened. And so is Max’s future when it turns out that Helen is the daughter of a white supremacist, who, believing Max to be white, drafts him into his hate group and encourages him to marry Helen.

This understandably creates problems for Max who now has to protect his true identity by persecuting others and to worry that his secret will be revealed when Helen becomes pregnant because their baby’s skin color may reflect its father’s original one.

Schuyler’s novel skewered everyone from the KKK to the NAACP, arguing that people on both sides of the color line profit from the country’s racial divisions. The book got decent reviews but some black readers took umbrage at its treatment of thinly disguised stand-ins for such figures as W.E.B. DuBois and Marcus Garvey.

I was turned off by the book’s bitter cynicism when I discovered it as a freshman in college and I found it to be just as sour when I re-read it after seeing the show. I suppose I also still haven’t forgiven Schuyler for lobbying against the 1964 Civil Rights Bill.

The musical’s book writer John Ridley, an Oscar winner for his screenplay for the movie “!2 Years a Slave,” knows that such beliefs won’t play today.  So he has softened the gibes against black leaders and instituted other changes designed to make the story more palatable to today's more progressive audiences.

Some of his fixes work (he amps up the pride some black characters feel about their race, which gives more space to a Langston Hughes-like figure who barely exists in the book but is nicely played by Ephraim Sykes).  Others don’t (he can’t figure out what to do with a character based on the black beauty entrepreneur Madam C. J. Walker, which leaves poor Lillias White with very little to do until the score calls for her to belt out a couple of numbers).

And still other fixes could have used more adjustments (the n-word is tossed around so much that I began feeling sorry for the actors—especially Howard McGillin and Theo Stockman in their roles as the show's villains—who had to repeatedly utter it).

However the biggest change is that Max’s best friend is no longer a guy named Bunny but a woman named Buni who, at least as played by Tamika Sonja Lawrence, is so appealing that it makes Max look bad for not hooking up with her instead of lusting after Helen no matter how well Jennifer Damiano tries to play Max's white object of desire.

Still, no one assembles a powerhouse cast like this one (the always appealing Brandon Victor Dixon plays Max-click here to read more about him) or spends such big bucks (the costumes look to cost more than the entire budget for most productions by the show’s presenter The New Group) unless they’re aiming for Broadway.

Thanks for this review. I wish the company a run worthy of their talents, especially Ms. Lilias White.