The Passions of "Novenas for a Lost Hospital" 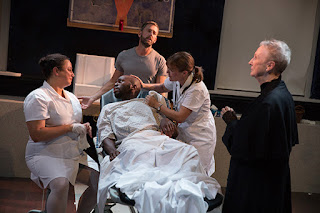 Theater began as religious ritual and playwright Cusi Cram and director Daniella Topol invoke that tradition with Novenas for a Lost Hospital, their passion play that is now running at Rattlestick Playwrights Theater through Oct. 13.

The titular hospital is St. Vincent’s, which operated in Greenwich Village for 161 years, caring for cholera victims in 1849, survivors of the Titanic in 1912, AIDS victims in the 1980s and ‘90s, and survivors of the attack on the World Trade Center on Sept. 11, 2001. Throughout all those years, the hospital also treated the more common ailments afflicting local residents, many of them poor and unable to pay, until its own poor finances forced it to close in 2010 (click here to read more about its demise).

The lament that Cram, herself a longtime Village resident, has written for St. Vincent’s begins in the courtyard of nearby St. John's in the Village, the Episcopal church that also served as a sanctuary for people with AIDS at the height of the epidemic. Following some singing, chanting and a ritual washing of hands, audience members who've been instructed to gather there are led around the corner to the theater.

Art work from the Visual AIDS project lines the stairway up to the theater and the playing space is initially filled with hospital screens decorated with photos and newspaper articles chronicling the life and death of the hospital.

Audience members are urged to look through all of it and are then ushered to pew-like seats and given small battery-operated votive candles by actors dressed as the 19th century Catholic nuns who founded St. Vincent’s. Once the screens are removed, the main ritual begins with the lighting of the first of nine larger candles symbolizing the novena prayers for the hospital.

Each of those candles initiate a scene in the life of St. Vincent’s. In one, nurses discuss the simultaneous exhaustion and exultation of caring for patients across the decades. In another, a young 19th century surgeon violates a religious taboo by using a corpse to practice a new life-saving procedure.

But the most poignant scenes are those centered around the hospital’s AIDS years, as administrators struggled to offer comfort, doctors to find a cure and patients to find courage as they all confront the disease.

The spirits of two prominent early American Catholics oversee and comment on all of it. Kathleen Chalfant brings her usual easy elegance to the role of Elizabeth Seton, the daughter of a prominent Revolutionary-era family who converted to Catholicism, established this country’s first community of religious sisters, founded the first Catholic school and was later canonized as the first American-born saint.

In a more flamboyant turn, Alvin Keith plays Pierre Toussaint, a former Haitian slave who became wealthy as a society hairdresser in New York, a principal benefactor of the original St. Patrick’s Cathedral, which still stands on Mulberry Street, and so overall generous to Catholic charities that he was the first laymen to be buried in the crypt under the alter of the current Fifth Avenue cathedral.

Their inclusion doesn’t really have much to do with the St. Vincent’s story, although I suppose it adds some gender and racial politics to the mix. And the rest of Cram’s script is similarly patchy. Some of the scenes go on too long. Much of the dialog is clichéd. The acting is uneven too. In fact, the overall effect is like watching a church pageant in which earnest enthusiasm counts as much as, if not more than, polished expertise.

But that’s the whole point of this show. It’s less concerned with impressing theater sophisticates than with raising consciousnesses about the role institutions like St. Vincent’s play in the life of this city and about the role we should all play in keeping them alive.

After the last candle was lit, the actors and musicians waiting outside led the congregation, for that’s what we had become, back onto the street. I worried that the music might disturb neighbors in the nearby buildings but as we made our way to the park across the street from the luxury condos that have replaced the hospital, I spotted one couple in a tenement window, waving, swaying to the music and giving their blessing to our procession.

We ended up under the canopy of the sculpture that memorializes the more than 100,000 people in the city who have died from AIDS-related illnesses. Chalfant gave a benediction, we formed our votive candles into a circle and then dispersed.

It was far from the best show I’ve ever seen. And it demanded the kind of audience participation I usually hate. But as I watched the scenes unfold I thought about how I wished the friends I’d lost to AIDS were here to see them and about how gentrification is now killing the city I love.  And as I walked away from the park, I couldn’t imagine a more spiritually uplifting evening of theater.

Labels: Novenas for a Lost Hospital