"Wives" is a Tale Too Sketchily Told 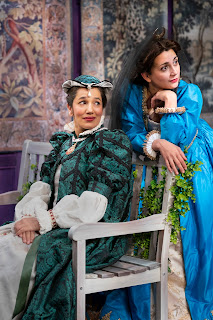 Falling out of love is no fun. I fell hard for Jaclyn Backhaus and her audacious play Men on Boats when I saw it four years ago.  It cleverly reimagined the real-life Powell Expedition of 1869 with an ethnically diverse cast of female actors assuming the roles of the 10 white men who set out to chart a path through the Grand Canyon. It was a smart and funny meditation on gender and a reminder that the primary beneficiaries of America’s devotion to manifest destiny have almost always been white guys (click here to see my review). Like any besotted lover, I could hardly wait to see another work by Backhaus.

Alas, I now have. Three times.  And none have lived up to that initial thrill. Her Folk Wandering, a meandering musical whose book she wrote, over zealously tried to combine the stories of the 1911 Triangle Shirtwaist Factory fire, the 1934 disappearance of the southwestern artist Everett Ruess and the 1955 death of the actor James Dean.

Inspired by the playwright’s own Indian relatives, India Pale Ale focused on the intergenerational clashes between a family of Punjabi-Americans but collapsed into little more than a sitcom. And now comes the even more frustrating Wives, which just opened at Playwrights Horizons this week.

Wives is particularly disappointing because the description on the Playwrights Horizons website promised “remarkable stories of Great Men! — and their whiny, witchy, vapid, vengeful, jealous wives.” Which suggested a return to the subversive feminist territory of Men on Boats but quickly ran aground.

As Backhaus has noted in several interviews (click here to read one of them) she has knit together four different plays that she started over the past few years. The seams show.

The obvious mission of Wives is to illustrate how circumstances have always forced women to become rivals or background players in the chronicles written by and about men. It wants to imagine how different things might have been if the women hadn’t had to filter their ambition through the males in their lives and instead could have become allies or at least to have controlled their own narratives.

It’s an appealing premise, particularly at this time when so much discussion about toxic masculinity is in the air. But the play is more a series of sketches than a cohesive argument.

A patchwork of locales and time periods, it opens with a scene set in the 16th century court of Henri II where loyalties are divided between his wife Catherine de’ Medici and his favorite mistress Diane de Poitiers. Then it skips to the 1960s where three of the novelist Ernest Hemingway’s four wives gather after his suicide to drink, dish and diss their shared spouse.

The remaining segments are set in a maharajah's palace in the northern Indian state of Rajasthan during the early 1920s and in an Oxbridge women's studies classroom in modern-day England. That’s a lot to cram into 80 minutes. A tighter focus on any one of these tales might have been more rewarding.

The real-life women Backhaus has chosen to highlight are worthy subjects but she gives so little information about each that it’s hard to appreciate or root for them. Instead we get cartoonish versions of who they were and the imagined resolutions to their problems ring false and improbable.

Even worse, when stuck for a laugh, Backhaus throws in some anachronistic patter and a smattering of profanity (“u fakeass bitch, I know he loved me more than you,” her Diane de Poitiers tells Queen Catherine.)

Director Margot Bordelon and her game four-member cast, particularly the increasingly invaluable Adina Verson (great every time I’ve seen her) do what they can to keep things hopping along, with supportive backup from Valérie Thérèse Bart’s witty costumes and Reid Thompson’s malleable set.

And there are entertaining moments. The opening scene in which Verson portrays a 16th century version of Julia Child was a crowd-pleaser the night my theatergoing buddy Bill and I saw the show.  But it has little to do with the overall theme of Wives.

At other moments, Backhaus resorts to telling (instead of showing) the points she wants to make. “I am told by the world that I do not exist but I stand here trying to see myself,” one character orates in the final section of the play.

I suppose all this griping is making me sound lke a jilted lover but having once been so beguiled by Backhaus, this last disappointment really has left me kind of heartbroken.