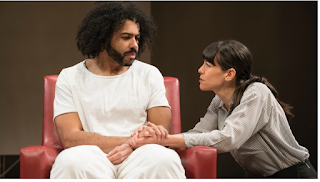 Maybe it’s just me but I’m troubled by the fact that over the past year I’ve seen or read three works (all by very talented African-American writers) in which a black person has tried to solve a personal problem by asking someone to treat them as a slave. Critical acclaim has greeted all three.

First up was Paul Beatty’s 2015 novel “The Sellout.” I was a latecomer to this satire about a black man who is so distressed by the way poor black people are treated that he appeals to the Supreme Court to reinstitute both segregation and slavery but it not only won that year’s National Book Award but was the first American novel to win London’s prestigious Man Booker prize for the year’s best novel written in the English language.

Last fall, both critics and serious theatergoers (including me) couldn’t stop talking about Yale Drama School wunderkind Jeremy O. Harris’s pointedly-named Slave Play, which had interracial couples trying to salvage their broken relationships by voluntarily engaging in role play as masters and slaves.

And now we have Pulitzer Prize-winner Suzan Lori-Park’s White Noise, which opened Wednesday at the Public Theater with a story about a black guy so traumatized by an encounter with white cops that he offers to sell himself to his white best friend.

What is going on?  I get that these are satires and allegories that are trying to provoke serious discussions about the fractured state of race relations in this country but is this truly the only vocabulary that we can use to talk about it?  Do white people really need to hear that things are so bad that black people think being enslaved would be better?

And let’s face it, most of the people reading Beatty’s book, attending shows at New York Theatre Workshop or the Public and maybe even reading this blog are white, as are most of the critics who have cheered on these works. Are these shows giving critics and other “woke” white folks a too easy way to show that they're on the right side of things?

To be fair, all of these works, especially Park’s, try to offer a nuanced take on race. Leo, the lead character in White Noise is a college-educated artist who lives with a white attorney named Dawn who defends poor black people. Their best friends are their college buddies, Ralph, a wealthy white guy who has a day job as a professor, and his girlfriend Misha, an African-American vlogger who hosts a web show called ‘Ask A Black.”

The couples regularly hang out in a bowling alley (cleverly realized by set designer Clint Ramos) that is part of a chain that Ralph inherited but seems to have been written in primarily because Parks thinks it’s funny. Or maybe I missed the meaning of that metaphor.

The not-at-all-funny deal that Leo proposes during one of the couples' regular nights out calls for him to spend 40 days as Ralph’s slave because he thinks it will relieve him of the pressures that contemporary society places on black men and that going back to the roots of America’s original sin will help him find the fortitude his ancestors used to survive.

The first week or so goes according to plan, curing Leo’s lifelong insomnia (I'm sure there's a "woke" metaphor somewhere in that) and changing his interactions with the white people he encounters. But then the shift in their dynamic begins to affect Ralph too. He starts making imperious demands on Leo that lead to a series of humiliations, all confusingly complicated by the fact that Leo has brought this on himself. Meanwhile, Dawn and Misha are sorting out their own relationship and why they’ve chosen to be with men of their opposite race.

Each character is given a soliloquy in which to examine his or her own psyche, with an emphasis on how race and sex have shaped it. And under the sure-handed direction of the Public’s artistic director Oskar Eustis, they’re all brilliantly performed by a sensational cast.

Daveed Diggs, who won him a Tony for his portrayal of Hamilton’s Thomas Jefferson, brings the same can’t-take-your-eyes-off-him charisma to Leo, making it hard not to root for the character even when he’s making stupid choices (click here to read an interview with the actor).  Thomas Sadoski taps into an amiable malevolence for his portrayal of Ralph that may someday make him a superb Iago.

Although given somewhat less to do, Zoë Winters and Sheria Irving are also strong as Dawn and Misha, with Irving supplying most of the humor that both the character and the play use to camouflage the toll this society’s demands can put on educated black women.

Yet even these performances can’t mask the fact that these soliloquies—and even this three-hour play itself—aren’t really saying anything we haven’t heard before about race in this country.  Except, of course, for the slavery thing. In the end, it’s what I—as I'm betting most of folks who see this show—walked out of the theater thinking about.

So now, just in case anyone is wondering, I feel compelled to get it on the record that no matter how bad things are or how many books and plays posit the possibility, there are not lots of black people sitting around and thinking that a return to slavery is a way to make America great again.