Getting Reacquainted with "Boesman and Lena" and "By the Way, Meet Vera Stark" 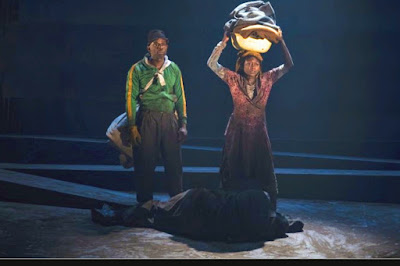 Revivals can be tricky for someone like me who loves discovering new playwrights and seeing new works by my favorite contemporary writers. And yet, there is the undeniable lure of seeing what different directors and actors will do with shows I’ve seen before. Sometimes these new incarnations bring a thrilling freshness to a familiar work. Other times they come off as pale imitations of the original.

I recently had both experiences when I saw revivals of Athol Fugard’s Boesman and Lena and Lynn Nottage’s By the Way, Meet Vera Stark, each of which recently opened at Signature Theatre, the company that has made a name for itself by restaging the work of significant playwrights.

Signature’s relationship with Fugard dates back to the 2011-2012 season when it presented three of the South African playwright’s works and the company has continued to do a Fugard play at least every other year since then. Boesman and Lena, which was originally performed at a South African university in 1969, focuses on two days in the lives of a couple, categorized as “coloured” under South Africa’s apartheid system, who become refugees in their own land when government forces destroy the shanty town in which they lived.

A young me first saw Boesman and Lena when James Earl Jones and Ruby Dee played the eponymous couple in a 1970 production down at the old Circle in the Square. It’s one of those theatrical memories I’ve long considered sacrosanct. And yet I bought a tcket as soon as I heard that Signature had cast the dynamic actors Sahr Ngaujah and Zainab Jah in its production.

Ngaujah first caught my attention 10 years ago with his high-voltage performance as the Nigerian musician and activist Fela Kuti in the musical Fela! And I found myself mesmerized by Jah when I first saw her as a ferocious rebel fighter in Eclipsed, Danai Gurira’s 2015 play about the civil wars in Liberia. Neither actor disappointed me this time around either.

Director Yaël Farber’s production of Boesman and Lena opens with the weary couple trudging through the audience to the mournful sound of the clanging pots that are among their few remaining possessions. Lena’s ceaseless chatter—questions about where they will spend the night, complaints about the beating Boesman gave her that morning and musings about how her life has come to this point—provide the energy she needs to keep going. Boesman’s sullen silence underscores his desperate—and potentially dangerous—hopelessness.

The situation becomes even more volatile when they come across an ailing old Xhosa man and argue over whether they should take him into the makeshift camp they’ve set up on some barren mud flats along a river.

Jah is a joy to watch as she moves effortlessly from the puckishness of taunting Boesman to the pathos of comforting the old man to the friskiness of the improvised dance Lena breaks into when she needs to rally her spirits. Ngaujah is given a more limited palette to work with but he digs deep, revealing the intense sadness of a man so crushed by racism that the only relief he can find is to lash out at others.
Farber, herself South African, emphasizes the bleakness of these character’s lives with an intentionally hermetic production that eliminates the intermission and doesn’t even allow the actors to take a formal curtain call.

Some people I know have harrumphed that her approach is too unrelentingly grim but I think it perfectly captures the anguish that millions of refugees around the world continue to experience and to salute the resolve that allows them to persevere.

This revival doesn’t surpass or erase my memory of Jones, Dee and the great Zakes Mokae as the old man but it does give the show a new and urgent relevance.

Nottage, a double Pulitzer Prize winner, is in the middle of her inaugural season at Signature, which she has so far devoted to her more comedic plays (click here to read her feelings about that). By The Way, Meet Vera Stark is her satirical look at the way Hollywood has treated black women. 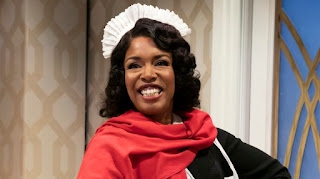 The play centers around the title character, an African-American actress in 1930s Hollywood whose only opportunities in the movies are roles as slaves or maids and whose day job is working as a real-life maid so that she can make ends meet.

The play's 2011 production at Second Stage featured a top-shelf cast that included Sanaa Lathan as Vera, Stephanie J. Block as the temperamental white movie star Vera works for and Karen Olivio as Vera’s friend who can and does pass for Brazilian so that she can get roles denied black actresses.

The current cast—with Jessica Frances Dukes, Jenni Barber and Carra Patterson assuming those roles—may be less starry but they’re equally game. The problem is in the direction. Jo Bonney directed the 2011 production with the same kind of brio that fueled so many Golden Age screwball comedies.

Some of its scenes went over the top but, for the most part, they brought the audience along with them. And they did it without sacrificing the show's important message. For Nottage's play is simultaneously a comedy, a tragedy, a call to arms and, especially in its second act, structurally adventurous. I had some problems with that earlier production (click here to read my review) but I thought about the show for weeks after seeing it.

Kamilah Forbes, who directed the current production, has a tougher time finding the right rhythm. At times the pacing is too fast and jokes fly by before they can register. Other moments drag on, particularly a few of the segments that use video. And some of the costume choices, especially the dress Vera wears in the second act, try too hard.

My sister, who loves ‘30s movies, hadn’t seen the earlier production of the show and so I invited her to this one. She struggled to stay with it but eventually fell asleep.

“So what happened at the end?” she asked me as we walked down the block to the venerable West Bank Cafe for a quick post-show dinner. I started to tell her and then realized I’d already forgotten. Which kind of breaks my heart since remembering Vera is the whole point of the piece.

Labels: Boesman and Lena; By the Way, Meet Vera Stark