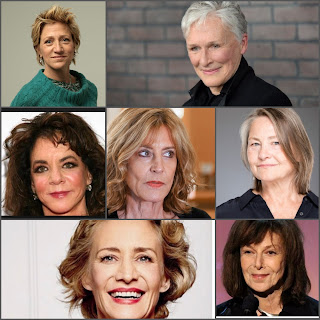 Drawing up a list of the fall shows I most want to see is my way of making myself feel better that summer (my favorite season) is ending. It's something I've done for even longer than I've been writing this blog. In most years, the choices are easy and obvious. Every so often, it's tougher because the pickings, to be frank, aren't all that great.  But this year, the theater season is offering an embarrassment of riches and I'm excited about almost everything that's coming.

However being a woman of a certain age, I find that I'm most looking forward to all the shows that are giving some fabulous actresses around my age—and even older—the chance to strut their stuff.  Those much anticipated shows include:

APOLOGIA:  Even before last year's presidential inauguration caused me to begin obsessively re-watching "The West Wing," I've been a Stockard Channing fan and so I'm really looking forward to seeing her in the flesh in Alexi Kaye Campbell’s play about a Baby Boomer who writes a controversial memoir about her past as a '60s-era radical.  Channing won raves when the show played in London last year and odds are that she'll do the same when it opens at the Laura Pels Theatre on Oct. 16.

BERNHARDT/HAMLET: Sarah Bernhardt was the greatest actress of her day (you can read more about her fascinating life and that of her rival Eleonora Duse in the new book "Playing to the Gods") and so it's fitting that the Divine Sarah, as she was known, is now being played by the also magnificent Janet McTeer in Theresa Rebeck's backstage comedy about Bernhardt's now-legendary decision to play the title role in Hamlet. It opens at the Roundabout Theatre Company's American Airlines Theatre on Sept. 27.

GLORIA: A LIFE: As a writer and editor, advocate and mentor, Gloria Steinem has earned her status as an icon of the modern feminist movement and now her story is being told in a play written by Emily Mann, directed by Diane Paulus and starring Christine Lahti, who I'd appreciated primarily as an excellent movie and TV actress until I saw her terrific turn last season in Suzan-Lori Parks' Fucking A. Gloria opens at the Daryl Roth Theatre on Oct. 10 and I now suspect this staged version of Steinem's story couldn't be in better hands.

THE LIFESPAN OF A FACT: There are lots of reasons to see this timely new stage adaptation of a book by John D'Agata and Jim Fingal. It's about fact checking fake news and it will bring the always-welcomed Daniel Radcliffe back to Broadway when it opens at Studio 54 on Oct 18. But what makes me happiest is that it's also bringing the great Cherry Jones back to the New York stage for the first time in five years. She plays the editor of a Harpers-style magazine but I would see her if she were just standing onstage reading a newspaper out loud.

MOTHER OF THE MAID: The Public Theater's attempt to turn the story of Joan of Arc into a musical last year was a disappointment but Jane Anderson's alternate version of the tale of the 15th century saint may offer some redemption. It focuses on Joan's mother and the fact that she will be played by the redoubtable Glenn Close has made this morality tale about the joys and sorrows of raising an unconventional child one of the hottest tickets of the season even before it opens on Oct. 17.

THE TRUE: Playwright Sharr White likes to write about complicated women and this time out he's chosen to fictionalize the story of Polly Noonan, a real-life political operative (and the grandmother of U.S. Senator Kirsten Gillibrand) who was a major force in Albany politics, known for her tough talk and fierce loyalty to that city's longtime mayor.  So who better to play her in this New Group production that opens Sept. 20 at the Pershing Square Signature Center than Edie Falco, the doyenne of complex, no-nonsense female characters.

THE WAVERLEY GALLERY: The last time the comic legend Elaine May performed on a Broadway stage was back in 1966 when she and her then partner did An Evening with Mike Nichols and Elaine May and so the 86-year-old's return in this revival of Kenneth Lonergan's comedy is all the reason that any theater lover would need to see the show.  The icing on the cake is that the all-star cast for this limited run also includes Michael Cera, David Cromer, Lucas Hedges and Joan Allen, making her own return to the New York stage for the first time in nine years when the show opens at the John Golden Theatre on Oct. 25.

As I said, an embarrassment of riches.