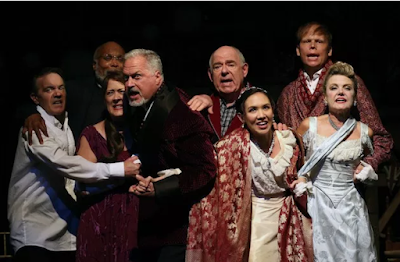 It may be a sacrilege to say this but I've never been a fan of the plays of George Bernard Shaw. I appreciate Shaw's place in the theatrical pantheon and his role as a pioneering progressive and feminist but his plays tend to be too long and too talky for me. So imagine my surprise when I found myself having a good time at the Gingold Theatrical Group's production of his 1920 play Heartbreak House, which is running in the Lion Theatre at Theatre Row through Sept. 29.

Shaw reportedly wrote Heartbreak House as an anti-war manifesto designed to condemn the British upper classes for blundering into WWI, which lasted four years and eventually claimed over 20 million lives.

Subtitling the play "A Fantasia in the Russian Manner on English Themes," he centered the action around a Chekhov-style country weekend attended by clueless aristocrats, egocentric bohemians and callous industrialists.

They gather in 1914, a few weeks after the war has begun, but the oblivious guests spend their time spouting their philosophies and attempting to hook up with one another out of love, lust and the desire to make the best deal they can to advance their personal positions in society.

Director David Staller, artistic director of the Gingold, which was started in 2006 to champion Shaw’s work, has taken some liberties with the plot, cutting the text roughly in half from four hours to a relatively brisk 2 hours and 20 minutes.

Staller has also added an anachronistic framing device that opens the evening in the basement of a London theater during WWII where some actors decide to put on Heartbreak House to distract the audience supposedly huddled there from worrying about the blitz attack raining down bombs above.

This turns out to be a very smart idea. It excuses a mix of acting styles and some mismatched costumes since the framing device calls for the fictional theater's backstage staff to take on roles in Shaw's play.

Thus, performances range from the perhaps too earnest sincerity of Karen Ziemba's party hostess to the trademark daffiness of Jeff Hiller in a variety of roles including the female housekeeper and a burglar with special reasons for breaking into the house.

The conceit also reduces the need to create a fancy upper-class home. Instead, the entire theater is decked out with WWII posters featuring Winston Churchill, while the actual set resembles the dusty underbelly of a stage, complete with rigging and old props.

Perhaps most importantly, the device creates a we're-all-in-this-together spirit by having the actors periodically lead sing-alongs of such determinedly uplifting numbers as "Pack Up Your Troubles" and "Keep the Home Fires Burning," whose lyrics are included in a faux "In the Event of an Air Raid" program.

It’s silly but still hard to resist.  And hardest of all to resist is the deliciously arch performance by Alison Fraser, who plays Lady Ariadne Utterword, an old-school aristocrat who has unabashed disdain for the lower classes.

Every line Fraser utters through tightly pursed lips and every gesture of exaggerated ennui she makes is a hoot. She pretty much walks away with the show and my friend Joy and I gave her an extra ovation when she entered the nearby Chez Josephine when we were having dinner there after the show.

Every other Shaw production I've seen has taken itself very seriously, waving its social commentary in the air like a banner at a protest demonstration. The message in this Heartbreak House that leaders have a responsibility to the people they serve is still urgent but the production isn't afraid to have fun. And to paraphrase the great anarchist Emma Goldman, a revolution (or a play) without a little fun isn't one worth having.