The Yiddish "Fiddler on the Roof" Soars 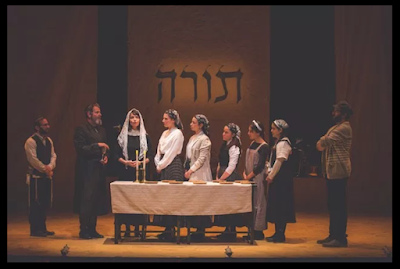 So many people have been raving about the National Yiddish Theatre Folksbiene's production of Fiddler on the Roof that I felt I had to see it. At the same time, I feared it wouldn't live up to all the hype. But I finally did and it certainly did. In fact, this is truly a production not to be missed by anyone who loves this show, who loves musicals or who just loves.

I wasn't so sure of that at first. The show is playing at the Museum of Jewish Heritage, which is located in a not-all-that-easy-to-get-to section of Battery Park City. Then, when I did get there with plenty of time to have lunch at the museum's restaurant before my matinee performance, the host at the door dissuaded me from coming in, urging me instead to buy a pre-wrapped sandwich from the cafe and eat it at one of the tables in the hallway outside the restaurant.

But my biggest "oh, no" came when the show began. I knew going in that part of what makes this Fiddler unique is that it's performed entirely (songs included) in Yiddish with supertitles provided for those of us who don't speak the language. Still, it took me awhile to establish the right rhythm of reading and watching. But once that kicked in, I was transported to the tiny Jewish village of Anatevka in a corner of Russia around the turn of the last century. And for the next three hours, I marveled at how perfect a musical Fiddler on the Roof is.

Credit for that obviously begins with the now-classic score by Jerry Bock and Sheldon Harnick and the airtight book that Joseph Stein derived from the stories the Yiddish writer Sholem Aleichem wrote about the God-loving milkman Tevye and his independent-minded daughters. But this revival's success is mainly due to the direction of Joel Grey.

Having his production performed in Yiddish, the language that Fiddler's characters would have spoken, obviously helps. But Grey, himself a legendary performer, also walks the talk and he has brought out every ounce of the underlying melancholy in this story about people forced to reckon with a changing and often cruel world without losing one bit of the show's heart and humor.

The look of the production is spare and simple but Grey has recruited an A-team of collaborators, including Beowulf Boritt for the sets, Ann Hould-Ward for costumes, Peter Kaczorowski for lights and Dan Moses Schreier, who did an outstanding job with the sound design. The auditorium at the museum was filled with octogenarians at my performance and I didn't spot anyone wearing one of those hearing devices that theaters rent out or complaining about not being able to hear the show.

In keeping with the ethos of simple authenticity, there are no names in the cast, with the exception of Jackie Hoffman, who plays Yente, the village matchmaker. Yet, this is the best Fiddler cast I've seen and the other three were on Broadway.

Nearly everyone onstage (there are 26 in the cast, which adds to the feel of a real village) looks and sounds as though they might have actually lived in a place like Anatevka. The fact that the actors reportedly had to learn their lines phonetically makes this all the more impressive.

Unlike others who have been intimidated by Zero Mostel's seminal performance as Tevye in the original production, Steven Skybell doesn't try to imitate Mostel or to invent an updated take. He simply inhabits the character and his Tevye is all the more real for it, a good man seriously torn between the traditions that have defined his life and a desire to give his daughters the chance to make the best of theirs.

Choreographer Staś Kmieć takes a similar approach to the dances, neither slavishly duplicating the steps that Jerome Robbins created for the original 1964 production nor trying to wiggle away from them. The result is that his dances, particularly the big all-male production numbers, are satisfyingly rooted in the verisimilitude that Grey has set as this revival’s baseline.

I'm usually not a demonstrative theatergoer but I swayed to the music played by the show's 12-piece orchestra and I chuckled at the interactions between Tevye and his neighbors. But more than anything I found myself caring what would happen to all of them after they were driven out of their homes at the end of the play and if they'd end up succeeding in America, joining the revolution and helping to overthrow the czar or dying in the Holocaust.

There's been talk that the show might get a commercial run (click here to read about that), perhaps even on Broadway but if you can, make the trek to Battery Park and see this Fiddler on the Roof at the museum before its extended run closes there on Oct. 25. And try to squeeze in a visit to one or two of the museum's exhibits where the ghosts of the residents of this Anatevka are present throughout.

Labels: Fiddler on the Roof