Gettin' the Band Back Together Falls Apart 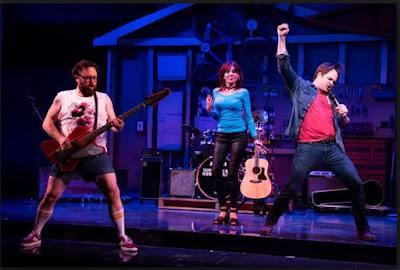 Because I’ve always believed there should be shows on Broadway that cater to all kinds of tastes, it’s not easy for me to say this but the new musical Gettin' the Band Back Together doesn't belong on Broadway.

I’m not being snobbish. The show simply isn't good enough. If you like a show with a rock beat, you'd be better off catching SpongeBob SquarePants before it closes next month.  Or if battle-of-the-band narratives are your thing, you'll have much more fun at School of Rock.

Gettin' the Band Back Together's pop-rock music and lyrics by newcomer Mark Allen are generic. Its book by the show's lead producer Ken Davenport (click here to read a piece about him) and a group of actors who call themselves The Grundleshotz does a piss-pour job of telling the story of some 40 year-old guys trying to revive their high school rock band. And the humor is puerile; "I slept with your mom," goes the refrain of one song.

Even the earnest efforts of director John Rando, who won a Tony for staging the original production of Urinetown; and choreographer Chris Bailey, who put together the entertaining moves for The New Group's recent production of Jerry Springer—The Opera, can't save Gettin' The Band Back Together.

Instead the show emits an air of desperation that has actors dropping their pants, running through the aisles to high-five audience members and, in the case of Marilu Henner, the only name in the cast, handing out Rice Krispies Treats and posing for selfies with audience members during the intermission.

The rest of the cast works hard too. And despite its other failings, there is an audience for this show. People who've seen it have given it an average 74 rating on Show-Score. The guy across the aisle from my sister and me laughed so loudly and rocked out to the music so vigorously that I couldn't help wondering if he were a paid plant or had just mismanaged some medication before coming to the theater.

But that guy and other fans of Gettin' the Band Back Together might be better served if the show were playing off-Broadway in a venue where ticket prices are cheaper and alcoholic beverages widely available to everyone in the room.

Now, it's no fun for me to kick a show when it's so down (the professional critics on Show-Score gave Gettin' The Band Back Together an average 54 rating and the box office is anemic with grosses of just $175,000 last week) so I'm going to cut this short with just one final piece of advice:

If you go to see the show, avoid the first couple of rows at the Belasco Theatre. There's a confetti shower in the middle of the second act and one of the actors cleans the stage by taking a big broom and sweeping the debris into the audience. Which, come to think of it, is a fairly apt metaphor for this entire endeavor.

Labels: Gettin' The Band Back Together