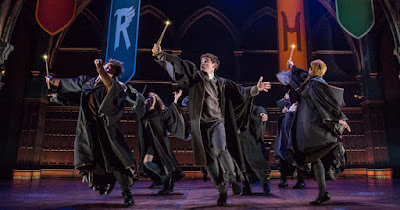 My name is Jan and I'm a Harry Potter fangirl. Seriously. I mean I pre-ordered the published script for Harry Potter and the Cursed Child on Amazon, downloaded the Kindle version on the day it came out last July, devoted a couple of uninterrupted hours to reading it that same afternoon and then set up a Google alert to notify me when I could buy tickets to the stage version when the show transferred from London's West End to Broadway's newly renovated Lyric Theatre.

I fell under Harry Potter's spell 20 years ago when the first of the seven books in J.K. Rowling's series about the education of a boy wizard was published in the U.S. I clearly wasn't the intended audience but its enchanted world swept me up and I turned my teenage niece Jennifer onto the book. We went through the rest of the series together, reading each installment as soon as it came out. We watched the movies that made Daniel Radcliffe a star too, or at least most of them since the final ones grew a little tedious.

So both Jennifer, now herself the mother of a two-year-old, and I were excited and nervous about the prospect of seeing our beloved Harry's world brought to life on a stage. We left totally delighted by what we'd seen.

Playwright Jack Thorne, working off a story devised along with Rowling, and director John Tiffany have created a two-part, five-hour saga that extends the coda at the end of the final book. It's a smart idea, playing directly to the Gen Yers, who grew up reading and loving the Potter books. Like them, Harry is now an adult. He's married with three kids and working for the Ministry of Magic, where his old friend Hermione is the top minister and married to their old pal Ron.

The show opens with the three friends and Harry's wife Ginny at the train station, preparing to send their own kids off to the wizarding school Hogwarts. Hermione and Ron's daughter Rose can't wait to start there but Harry's middle son Albus, named for the famed former headmaster of the school, is more reluctant.

A loner, Albus has never adjusted to being the son of a famous father. That creates a bond between him and another lonely boy wrestling with his family's legacy, Scorpius Malfoy, the son of Harry's one-time nemesis Draco who is in disgrace for having been a follower of the evil wizard Voldemort, whom Harry vanquished at the end of the books.

The play's plot is a convoluted tale about the two boys' clumsy attempts to use a time traveling machine to change a tragic incident in the past. It's hard even for Potterheads, who cheer loudly whenever a familiar name or place is mentioned, to follow what's going on. But plot is just a maguffin for Rowling who has always been far more interested in the atmospheric setting of the world she created and the emotional connections between the people who populate it.

Thorne (click here to read an interview with him) and Tiffany remain true to that spirit.  But even audience members who come without knowing the difference between Hogwarts and Azkaban (a guide and glossary are included in the program to help out) can appreciate the magic they've created onstage.

Characters disappear right in front of our eyes. Others fly through the air, without any apparent support. Ghostly apparitions float throughout the theater. The how-did-they-do-that sleight of hand was crafted by the illusionist Jamie Harrison and is supportively lit by Neil Austin. Meanwhile, the master movement maker Steven Hoggett choreographs such brilliant sequences that he picked up one of the show's 10 Tony nominations even though Harry Potter and the Cursed Child isn't a musical.

The show seems destined to pick up a bunch of Tonys when they're given out on June 10. Some critics are gripping that it doesn't deserve the prize for Best Play because, they say, the sensational stagecraft obscures a sappy story. But I was moved by the struggles of the play's fathers and sons to connect with one another. And I thought the final scene was a perfect way to end the saga. 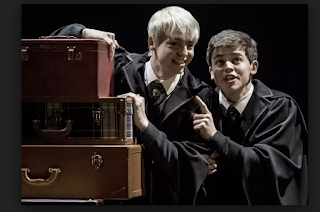 Much of the credit for that must go to the show's top-notch cast. And although it's unfair to single out any of the principal players, I'm going to do it anyway and cheer Anthony Boyle who brings both humor and poignancy to the role of the towheaded Scorpius and is a frontrunner for the Tony for best actor in a featured role (click here to read an interview with him).

I'm also cheering Noma Dumezweni's wise and warm performance as Hermione. Some fans complained when Dumezweni, a black Brit of South African descent, was originally cast in the role but the noise quieted down after Rowling tweeted her wholehearted support for that decision and Dumezweni's Tony-nominated performance should please all but the most retrograde naysayers (click here to read more about her).

The offstage experience is fun too. Some audience members—both kids and adults—show up in costume and parade around the lobby as their favorite characters. And I was even charmed by the renovation of the Lyric, which use to look cold and unwelcoming but now resembles a cozy Victorian-era theater. However some people have complained about problems with the narrow steps in the center aisle that have caused a few audience members, including the 93-year-old critic John Simon, to fall (click here to read about that) so watch where you walk if you go.

Although going to see Harry Potter and the Cursed Child isn't easy either. The producers are using a verified ticketing system so that purchasers have to register and then, after being approved, have to join an online queue to buy tickets when blocks of them are released for sale. The tickets aren't cheap either, since you have to buy both parts. And yet, it's money well spent. I've already got seats to see it again later this summer. Like I said, I'm a fan.