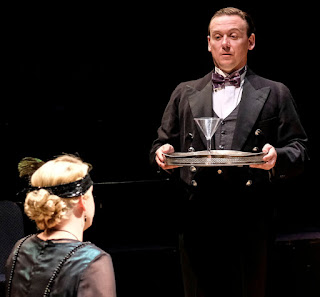 We theater junkies can be a demanding lot. And sometimes we let our pursuit of the excellent get in the way of our enjoying the very good. At least that's how I've been feeling about two shows by master playwrights that recently opened to middling reviews. I, too, had carps about them and yet I also left each theater grateful that I'd had the chance to see each show. Here's why:

A Brief History of Women: Alan Ayckbourn has a reputation for clever works like Absurd Person Singular and The Norman Conquests that play with form while tickling the funny bone. But the laughs in A Brief History of Women, Aykbourn's  81st play over a nearly 60-year career, tend more toward rueful chuckles than the out-and-out guffaws that so many of his other plays elicit. Or as the couple sitting next to me lamented, "it isn't as funny as he usually is."

Still, Ayckbourn, who also directed this production which is playing as part of the Brits Off Broadway festival at the 59E59 Theaters through May 27, hasn't lost his knack for poking behind the stiff-upper-lip facade of Britain's middle and upper classes. This time he does it through the changing fortunes of an English manor house and the local everyman Anthony Spates whose life intersects with it from his service as a teenaged footman to the noble family that owns the house in 1925 through his tenure as the manager of the place and the caretaker of its legacy when the building becomes a posh hotel in the 1980s.

There are amusing bits along the way, most of them delivered with deliciously hammy relish by Russell Dixon, who, like most of the six-member cast, assumes different roles as the house's function changes over the years. But it is Antony Eden's quietly understated performance as Spates that anchors the play and sent me away thinking back over the places I've lived and the people who filled those empty buildings and also my heart. As I tweeted when I got home, A Brief History of Women may not be top-shelf Ayckbourn but even generic Ayckbourn has what it takes to hit the spot. 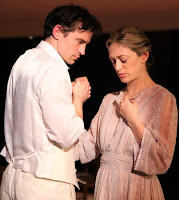 Summer and Smoke: As big a Tennessee Williams fan as I consider myself to be, I had never seen Summer and Smoke until my friend Ellie and I recently attended the Transport Group production that is playing at Classic Stage Company through May 25. I'm not sure it's the best introduction to this play because director Jack Cummings III has created such a minimalist production that characters actually have to mime eating ice cream cones and playing cards because there are no props or set, except for two paintings and a few chairs.

But what the play does have is yet another glorious performance by Marin Ireland who portrays Alma Winemiller, the restless but repressed daughter of a minister in a small Mississippi Delta town during the early years of the 20th century. Alma, whose name she likes to tell people is Spanish for soul, yearns for both a more cultured life and for the affections of her next door neighbor John, the dissolute son of the town doctor.

Nathan Darrow is alluring as John, whose inner turmoil rivals Alma's and who is drawn to her but willing to settle for something less than the challenge she offers. There are other good performances too, including Tina Johnson as the town busybody and Barbara Walsh as Alma's mother, another restless woman who is locked in a bad marriage that has driven her mad.

But the play's success rests on Alma's shoulders. The character has often been played by an actress pretending to be homely but Ireland's Alma is simultaneously aware of her beauty and frightened of it and of what the feelings inside her might unleash if fully acknowledged. This take on the roll, the acquiescent undoing of an intelligent and sensual woman, deepens its poignancy. Some scholars say Alma was Williams' favorite female character and Ireland makes it easy to see why—and why it's worth seeing this production.

Labels: A Brief History of Women, Summer and Smoke