The Shared Promise and Common Failings of "Can You Forgive Her?" "The End of Longing" and "The Whirligig"

Has someone been traveling around peddling the idea that all a play now needs to be successful is quirky characters, snappy dialog and a speech at the end about the meaning of life?  I ask because three shows I've recently seen fit that formula and despite having been written by pedigreed playwrights and performed by talented casts, all three ran off the rails.

Going in alphabetical order, I'll start with Can You Forgive Her, a comedy by Gina Gionfriddo that is running at the Vineyard Theatre through this weekend but that is nowhere near as entertaining as the earlier works (Becky Shaw and Rapture, Blister, Burn) that twice made Gionfriddo a Pulitzer finalist.

A bookrack filled with 19th century novels has been conspicuously placed in the Vineyard's lobby, a nod to the fact that the play's title is borrowed from the 1864 Anthony Trollope novel of the same name and that its storyline is a modern spin on the literary marriage plot in which an aspiring young woman tries to better her circumstances by hooking up with a rich guy.

And right there we have a problem. Because this is not the 19th century and what such a woman can now do is get a job and make her own money. However that option doesn't seem to have occurred to Miranda, the title's eponymous "her."

Instead, despite having a degree from a top college, Miranda sleeps with men who will pay her bills, take her out to fancy restaurants and buy her goodies like Gucci handbags. When one of her sugar daddies discovers that she's seeing another, she hides out in the home of  Graham and Tanya, a working-class couple in the New Jersey beach town where Miranda is visiting.

Graham and Tanya have relationship problems of their own. He is emotionally paralyzed by the recent death of his mother and she's a single mom who has a history of making bad choices.

None of this makes much sense. It's hard to believe that Tanya, already nervous about Graham, would leave him alone with Miranda. And it's even more unlikely that each of Miranda's lovers would show up and then hang around to squabble. 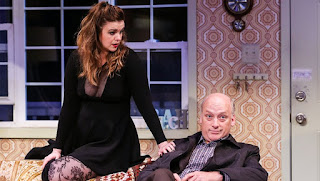 Can You Forgive Her? is only 90 minutes but the first hour seemed like two. Amber Tamblyn works hard (perhaps too hard) to make Miranda an irresistible kook (click here to read an interview with her) but the play only comes alive in its final third when Frank Wood arrives as the older of Miranda's two lovers. Wood's character isn't any more convincing than the others but this actor is such a master craftsman that he truly is irresistible.

The premise of The End of Longing, which opened Monday night in an MCC Theater production at the Lucille Lortel Theatre, also strains credulity. It opens with a guy hitting on a woman at a trendy bar. She turns him down but moments later they discover that their best friends are dating one another and before you can say "Pisco Sour" they've hook up too.

But, as in any romcom, there are obstacles. And theirs are doozies. He, Jack, is an alcoholic in denial. She, Stephanie, is a $2,500-a-night call girl. Each tries to be tolerant of the other's foible until they can't.

Then, toward the end of the show's 100-minute running time, Jack has an epiphany, delivers a fervent soliloquy and everybody, including Stephanie's neurotic best friend (nice to see Sue Jean Kim cast in a role that isn't specifically Asian) and Jack's salt-of-the-earth bestie, end up happily (click here to read the cast's reflections on the show).

There are only two things that make this show even passably noteworthy. The first is that it's written by and stars Matthew Perry, who is still best known for playing Chandler on the sitcom "Friends." His residually high Q-Score is clearly the reason that the Lortel has had to open its rarely used balcony to accommodate the demand for seats. 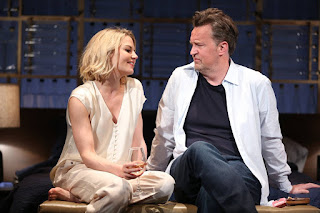 The second thing is that Perry has waged his own battles against booze and drugs and has become such a major advocate for drug rehabilitation programs that he even converted his former Malibu mansion into a home for recovering addicts. Those experiences inform Jack's climactic speech about the challenges of staying sober. It's the most genuine thing in the play. But, alas, it's not enough to save it.

The Whirligig, which is playing in a New Group production at The Pershing Square Signature Center through June 18, also boasts celebrity authorship. It's written by the actor Hamish Linklater (click here for a Q&A with him) and features incidental music by Duncan Sheik.

Although primarily an ensemble piece, this drama centers around a young woman named Julie, who is so gravely ill that she's already lying in a hospital bed onstage when the audience enters The Griffin theater at Pershing Square. A series of flashbacks explain how she got there and how her approaching death is affecting the lives of her family and friends.

The story is told through one of those fractured narratives that so many writers now resort to instead of just figuring out how to create momentum in a straight-ahead narrative. I tried to follow what was going on but eventually gave up. But at least I stayed for the second act; several of the people at the matinee I attended ducked out during the intermission break.

What kept me going were the first-rate performances. Zosia Mamet brought welcomed humor and pathos to the role of Julie's best friend, a former wild child who blames herself for the bad choices that have landed Julie in that hospital bed.

And it was particularly great to see Norbert Leo Butz back onstage as Julie's dad, who wonders what part his self-absorption has played in the tragedy. He gets the epiphany speech in this one and, no surprise, Butz delivers it well. But, as they say in the news business, all three of these plays are too much tell and not nearly enough show.

Labels: Can You Forgive Her?, The End of Longin, The Whirligig