"Animal's" Bark is Stronger than Its Bite 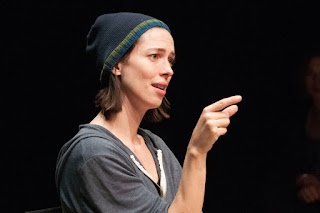 Madness is unimaginable to those of us unaffected by it and yet that hasn't stopped writers from trying to recreate what it must feel like to lose control of one's mind. And actors also embrace the challenges such roles offer, from Alice Ripley's sensational turn as the schizophrenic mom in Next to Normal to Frank Langella's heartbreaking portrayal of the Alzheimer's afflicted title character in Florian Zeller's The Father. Both performances not only won Tonys but also shed light on the anguish people with those conditions suffer.

Now Rebecca Hall is bringing her considerable talent to the portrayal of an equally disturbed woman in Clare Lizzimore's play Animal, which is running at the Atlantic Theater Company through this weekend. Hall hits all the notes of a woman who is alternately fearful, frustrated and funny. I just wish this play were as good as she is.

As often happens in these kinds of works, the malady is treated as something of a mystery and we in the audience have to piece together what's happening. But in this case, Lizzimore seems more interested in the gimmick of the guessing game than in making us truly care about Hall's character Rachel.

We're purposefully told very little about Rachel's life before the play begins but over the course of its 80-minute playing time, her behavior seems to become more and more erratic. She starts up a flirtation with a hunky stranger. She mistreats her stroke-addled mother-in-law.

All through it, her husband (played by Hall's real-life spouse Morgan Spector; click here to read an interview with them) and a patient shrink (Greg Keller) continue looking for ways to help her. But despite the witty lines Lizzimore has given Rachel, I got more annoyed with her than either of those men did.

Director Gaye Taylor Upchurch attempts to showcase the performances by stripping away everything else. Rachel Hauck's leisure-wear outfits for the characters could pass for clothes the actors might have worn to the theater.

Meanwhile, the action unfolds in Atlantic's small studio space with the audience sitting on both sides of an almost entirely bare playing area. Only Stowe Nelson's slightly spooky soundscape provides clues to what really might be going on.

I'll admit I was moved once the reveal was unveiled but that's mostly because someone close to me is going through a similar experience. Still, it's even more maddening that Lizzimore's resolution is far more pat than real life's could ever hope to be.