Why "If I Forget" is So Memorable 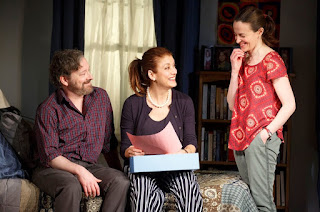 In some ways, the family in Steven Levenson's new play If I Forget will be familiar to just about anyone who has a family. There's the bossy big sister and her henpecked husband, the adored son and his eager-to-please wife and the passive-aggressive sibling who keeps reminding everyone how much she's sacrificed her own life to take care of mom and dad as they decline.

But the Fischers, the family in Levenson's drama, are Jewish which gives them a distinctive personality and a specific burden. The play opens in July 2000, a few days after the Camp David peace talks between the Israelis and the Palestinians have broken down. The ongoing debate over where American Jews should stand plays out in the contrasting attitudes of the family patriarch Lou and the favored son Michael.

As a young man, Lou helped to liberate Dachau at the end of World War II and the horrors he saw there forged his visceral connection to the state of Israel. Meanwhile Michael, a Jewish studies professor up for tenure, has written a book reprimanding Jews for defining themselves in terms of the Holocaust and for their unconditional support of the Israeli government.

But the one thing all the Fischers seem to revere is the store Lou and his recently deceased wife ran until the riots of the Sixties caused them to lease the shop to an Hispanic family who have turned it into a dollar store.

The modest rent they pay is now Lou's primary source of income. He hopes to leave the store to his grandchildren but a series of unfortunate events puts that legacy at risk.

If I Forget, which is running at the Laura Pels Theatre through April 30, shares a subject (how American Jews should define themselves) and a sensibility (smart and witty) with Joshua Harmon's Bad Jews, which played at the same theater three years ago. But Levenson, who also wrote the book for Dear Evan Hansen, still manages to tell a compelling story.

That's in part because he has an ear for the way regular people speak to one another. There are laughs galore as the siblings banter and bicker back and forth.

But it's also because Levenson has the ability to talk about complex issues without sounding preachy. The conversation in which Lou and Michael exchange their views on the Holocaust not only brought half the audience to tears at the matinee I attended but might serve as a model for civil discourse.

Levenson does throw too much into the plot with subsidiary storylines dealing with eating disorders, internet scams, interracial affairs and academic politics. But the stellar cast director Dan Sullivan has assembled, and skillfully directs, makes it all go down easy.

Larry Bryggman is heartbreaking as Lou, Kate Walsh is a hoot as the ball-breaking eldest sister Holly and Maria Dizzia hits all the right buttons as the self-sacrificing Sharon. But the standout is Jeremy Shamos, who as he so often does, creates sympathy for a guy cursed with emotional myopia.

They all make it clear that underneath the disagreements and the rivalries, the Fischers love one another. Despite their ups and downs, they're a functional family. And If I Forget is both functional and enjoyable.

Labels: If I Forget