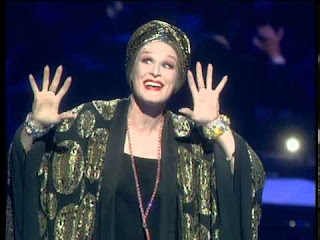 The day may come when attending a performance of Andrew Lloyd Webber's Sunset Boulevard will be like going to one for The Rocky Horror Show where audience members dress up like their favorite characters, yell out favorite lines and sing along with the actors onstage. And, judging by the audience response the night my friend Ann and I attended the current revival now playing at the Palace Theatre, that time may come sooner rather than later.

The show is, of course, based on the classic 1950 Billy Wilder film that tells the sad tale of Joe Gillis, a struggling screenwriter who becomes the unwilling paramour of Norma Desmond, a former silent movie queen who hires him to work on a script that she believes will end her 20-year absence from the screen.

Wilder's film is a wry meditation on fame, success and the movie business. And it's justifiably famous for its memorable lines ("I am big; it's the pictures that got small," "All right, Mr. DeMille, I'm ready for my close-up") and its memorable performances by William Holden and Gloria Swanson. It's also one of my all-time favorite movies and I've seen it at least a dozen times.

This revival, once again starring Glenn Close who won a Tony the first time around, is a stripped-down version of the lavish production Trevor Nunn directed 23 years ago. Now under the direction of Lonny Price, the show is presented in the style of the Encores! series with minimal sets and a full orchestra onstage.

And much has been made of the fact that the orchestra has 40 players. And its sound is certainly robust. Maybe too much so. It could be that my ears just aren't used to such a full sound. Or it could be that Lloyd-Webber's score, even with such lush ballads as "With One Look" and "As If We Never Said Goodbye,"  isn't weighty enough to support an orchestra of that size.

But no matter; the reason people are turning out for the show is to see Close in a performance that The New York Times critic Ben Brantley has declared one that "you have to, and I mean have to, see it in person."

Close certainly throws herself into the role, unafraid to appear needy, grandiose, near mad and almost campy (click here to read an interview with her). She gets a physical workout too as, now 69, she races up and down the stairways and across the catwalks that make up James Noone's set.

Her singing isn't always on key but that lends an extra poignancy to the character. Plus Close looks great in the sweeping caftans and dramatic turbans that costume designer Tracy Christensen has created for Norma.

But, like Norma, Close eats up nearly all the oxygen in the room. Fred Johanson finagles some breathing room as Norma's major domo Max and Paul Schoeffler is empathetic as the legendary director Cecil B. DeMille. But the British actor Michael Xavier (the revival originated as a production for The English National Orchestra) doesn't fair as well as Joe.

Xavier certainly makes a sexy Joe but his performance lacks the character's growing self-loathing as he succumbs to the luxurious life that Norma offers. Instead his Joe comes off as the kind of guy who'd be perfectly content to be a boy toy. So much so that Xavier couldn't help grinning as the audience went crazy when he flashed his six-pack abs during a pool scene.

And that's not the only thing that got them going. It can be hard to resist viewing Sunset Boulevard as high camp. And my fellow theatergoers didn't even try.

There were cheers whenever one of the famous lines was uttered and audible sighs when the familiar songs were sung. The original 16-week run has now been extended to June 5. And by that time, turbans may be cited in the audience.