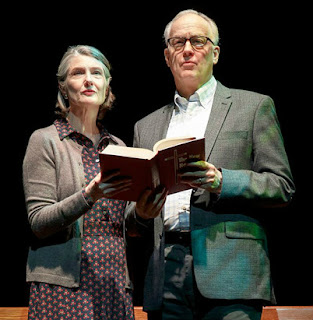 Tickets for Man from Nebraska sold out almost as soon as Second Stage Theatre put them on sale. That's because the show was written by Tracy Letts (a Pulitzer Prize-winner for August: Osage County) is directed by David Cromer (who master-minded the redefining revivals of Adding Machine and Our Town) and stars Reed Birney (the winner of last year's Tony for his performance in The Humans).

And so like every other self-respecting theater fanatic, my theatergoing buddy Bill and I pounced on tickets the moment we could. I'm happy that we did. Although not as happy as I thought I would be.

Man from Nebraska, a Pulitzer Prize finalist first produced by Chicago's Steppenwolf Theatre Company back in 2003, starts off as a story about a crisis of faith when a devout churchgoer named Ken discovers that he no longer believes in God.

Ken's pastor suggests that a break from the routines of his daily life may give him the time and space he needs to restore his faith. And so Ken sets off to, of all places, London.

Once there, he engages in a variety of behaviors he's never tried before, from drinking and casual sex to taking up with the black bartender at his hotel (he's never known anyone black before he tells her) and her flatmate a sculptor who introduces Ken to the power of art.

The specificity of the locale (again, why London?) and the characters suggest that Letts may be recounting a personal story that happened to him or someone he knew (click here to read more about the playwright).

Or maybe Letts intended Ken's journey to be an update on the classic Everyman pilgrimage. Whichever, the quest for God turns out to be a McGuffin and what we get instead is yet another story about a middle-class, middle-aged white guy going through a midlife crisis.

What saved it for me were the performances. Birney, with his hangdog looks and mild manner, was made for this role and he is, as always, wonderfully sympathetic.

And Annette O'Toole is even better as Ken's wife Nancy who dutifully cares for her dementia-addled mother-in-law, tries to calm the couple's high-strung adult daughter and wrestles with the fear that her husband may have left her for good.

I've seen O'Toole in three different shows over the past year and she so thoroughly transforms herself into each character she's playing that I hardly recognize her from one to the next, except that I'm always blown away by her performance.

I wasn't as wowed by Cromer's staging. When the audience walks in, all of the furniture that will be used throughout the first act is arranged at the back of the stage and as the scenes change from one to the other, a small army of black-clad stage hands move pieces into place.

I kept wondering if things might have been easier and worked better if the set had been more impressionistic in keeping with the metaphorical nature of the play itself. Although set designer Takeshi Kata does deserve kudos for a reveal in the second act that awed Ken—and me.

In keeping with the traditional hero's journey, Ken eventually returns home but the transition is abrupt and makes Man from Nebraska's ending both unbelievably tidy and unsatisfying shaggy. I suppose real life can be that way too.  But I look to the theater for a more transcendent view of it.