Why "A Day by the Sea" is a Washout for Me 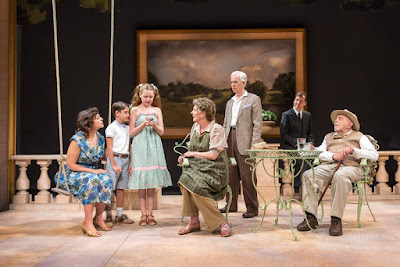 In the old days, plays were expected to be well made and largely about people who well mannered and well off. But in the years after World War II the working class playwrights known as the Angry Young Men blew that kind of theater right out of the water. Among those thrown overboard were the previously popular British playwrights Terence Rattigan and N.C. Hunter.

Salvage operations on Rattigan's reputation began in the late 1990s and continues to this day with revivals on both sides of the Atlantic of The Winslow Boy, Separate Tables and The Deep Blue Sea, which is enjoying an acclaimed new production at London's National Theatre that is scheduled to be simulcast next month.

And now the Mint Theater Company, which specializes in neglected works, is trying to do the same thing for Hunter with a revival of A Day by the Sea, which was extended this week at the Beckett Theatre on Theatre Row through Oct. 23.

Originally produced in 1953 with a cast that included Ralph Richardson, Sybil Thorndike, and John Gielgud, A Day by the Sea focuses on the mid-life crises of Julian Anson, a midlevel Foreign Service officer whose career is foundering, and Frances Farrar, a divorcee with two young children, who was taken in by Julian's family after her parents died and who has secretly loved him since they were in their teens.

Both are visiting the comfortable seaside home where Julian's widowed mother lives with her elderly brother-in-law, an alcoholic doctor who is supposed to be tending to the old man, and a few unseen servants. Hunter was unabashed in his reverence for Chekhov and everyone in the play, including the children's governess, seems to be in mourning for the life they cannot have.

They grieve over three acts and two intermissions and, under Austin Pendleton’s stately direction (click here to read more about his approach), they do it in the period-appropriate fashion that has charmed most of the critics. Although not me.

I'll grant that Hunter makes some gimlet-eyed observations about the choices people make in their lives and the courage necessary to take responsibility for those choices. And his play doesn't go to predictable places. But this production seems to me to just skim the surface of Hunter's melancholic truths.

The cast is wildly uneven. The only ones to capture the full pathos of the situations that Hunter has created are the 83-year-old George Morfogen, a veteran of classic plays for nearly six decades, as the ailing brother-in-law and Polly McKie as the governess grasping at a last chance for happiness.

The production also struck me as chintzy. The Mint has long operated on a tight budget but has often created marvelous sets. This one makes do with a few chairs and an awkward swing. Although set designer Charles Morgan does get some redeeming points for the clever idea of marking changes in the setting by substituting scene-appropriate images in a picture frame that dominates the back of the stage.

I also miss the Mint's old home. It was a cramped, musty space on the third floor of an office building but its lobby was always filled with books and other reference materials that provided background for each production. Browsing through them always made me feel as though I were part of the effort to give a forgotten play its due. But, as you can tell, I felt totally left out this time.

Labels: A Day by the Sea

I’m sorry that you felt like this production left you out of the action but I’m glad to hear this viewpoint on the show. Because I don’t live in New York getting access to plays and shows beyond Hamilton is hard. Without bloggers like you, I wouldn’t have any clue what the smaller side of Broadway looks like nowadays.

Michala, thanks so much for your kind words and even more for including me in the "ensemble" of blogs to read that you recently listed on your site. Cheers, jan