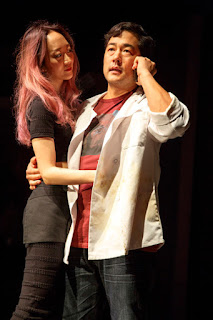 Aubergine is both a fancy name for eggplant and the title of Julia Cho's new play, now running at Playwrights Horizons through Oct. 2. The company has been touting it as a savory stew of love and loss, family and food. Some critics and—based on social media—many regular theatergoers have been eating it up.

The play's main character is a thirtysomething Korean-American chef named Ray, played disarmingly  by Tim Kang with just the right mix of cultivated confidence and earnest insecurity that so often marks second generation immigrants, particularly those who believe they've disappointed their parents.

Its narrative, such as it is, centers around the approaching death of Ray's father, who lies unconscious and attended by Ray, a hospice nurse Ray has hired to help care for his dad, the dying man's long-estranged brother from Korea and Ray's kind-of ex-girlfriend.

Throughout the vigil, they all muse, sometimes in long soliloquies, about meals that have played significant roles in their lives. And, in a gesture of reconciliation with his dad, Ray attempts to prepare a simple soup that has mystical meaning for his father's family.

There are lovely things in this production directed by Kate Whoriskey, including Derek McLane's elegant origami-style set that opens and closes to create different locations and the video projections that provide translations when Korean is spoken (click here for the director's take on the production). But I wasn't as taken with the show as much as some others, including my theatergoing buddy Bill.

Cho seems to have been inspired by the death of her own dad and so I feel a bit cold-hearted saying this but Aubergine's Proustian allusions to the memories food evokes, the connections it reinforces didn't seem all that fresh to me. And some of the magical realism Cho added seemed a bit forced.

But it was great to see so many Asian-American actors onstage, particularly in a story that wasn't defined solely by their ethnicity but rather reflected the humanity we all share: everybody eats, everybody's parents die.

It's also great to see this show being done by Playwrights Horizons. Companies such as the Ma-Yi Theater Company, the Pan Asian Repertory Theatre and NAATCO (The National Asian American Theater Company) have long provided a haven for Asian-American artists but they largely fall outside the mainstream for most non-Asian theatergoers.

I'm ashamed to say I can't remember the last time I've been to any of their productions. And so even though this play didn't fully satisfy me, I'm grateful that it was made so easily available for me to taste.