"The Layover" Fails to Get Off the Ground 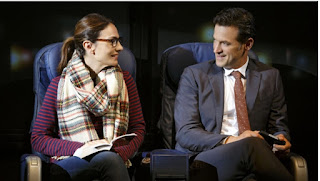 People write plays for all kinds of reasons and after we saw the new show that opened at Second Stage Theatre this week, my theatergoing buddy Bill speculated that playwright Leslye Headland may have written The Layover because she wanted to see if she could recreate a film noir onstage. Maybe she did but she didn't make a good one.

Here's the set-up: a man and a woman in the business-class section of an airplane strike up a conversation as they wait for their delayed flight to take off. He is Dex, a great-looking guy who says he's an engineer who oversees major building projects around the world. She is Shellie, a great-looking gal who says she teaches a college course on crime fiction in Manhattan (click here to watch them meet cute).

They both say they're single and when the flight is canceled until the next morning, they continue their flirtation over drinks and later in an airport hotel room. But everything they've said isn't true.

As their 90-minute drama unfolds, the lies are revealed. Yet the bond between them tightens, upending their fates and those of the inconvenient others in their lives.

To be sure, there are clear overlaps with noir-ish movies like "Double Indemnity" in which a frustrated wife and an insurance agent cook up a plan to kill her husband and run away with her inheritance and "Strangers on a Train," in which two men fantasize about trading the murders of people each wants out of his life.

Director Trip Cullman, a frequent Headland collaborator (click here to read about their partnership) and video designer Jeff Sugg underscore that connection by running silent clips from those old movies and others during the play's scene changes.

However, the borrowed atmosphere just serves to underscore what's missing in The Layover. The people in film noir are desperate to get out of their lives and willing to do anything to get what they want. But Dex and Shellie are just everyday unhappy.

She, like noir's traditional femme fatale, is more unhappy than he is but there's no urgency to Shellie's desire for something else. That makes their story something like an illicit tryst with a guy too drunk to get it up: all unease with no release.

As happens so often, the actors ride to the rescue and almost save the evening—but not quite. Annie Parisse seems incapable of giving a bad performance no matter what she's given to do and she earns sympathy for Shellie even though the play has her character acting savvy one minute and clueless the next.

And Adam Rothenberg is equally appealing as Dex, making it clear that he's a man who wants to do the right thing even when he knows it's wrong. It's also lovely to see the play cast and performed in a colorblind way with the other woman in Dex's life, an entitled divorcée, played by the African-American actress Amelia Workman with no allusions made to her race.

Troublesome women who get their comeuppance were a trademark of the film noir classics from the 1940s and '50s.  But that may be another reason this retro attempt didn't work for me. Misogyny, even in the hands of a feminist like Headland who's engaged to marry another woman, just isn't sexy anymore.