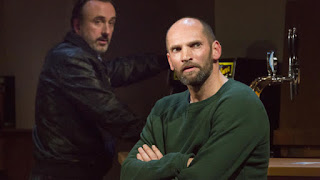 The intense drama Quietly extended its run this week and is now scheduled to play at the Irish Repertory Theatre thru Sept. 25. I'm always glad to see a show find a larger audience—even when it's a show that didn't work for me.

Quietly, a three-hander, is set in a working-class pub in Belfast, Ireland. Its easy-going barkeep is Robert, a Polish immigrant taking advantage of the EU's open borders, even while running the risk of raising the ire of the locals by rooting for his home team during a televised soccer match.

One of Robert's regulars is Jimmy, a tetchy brooder who grew up in the neighborhood during the violent clashes between Catholics and Protestants known as "the Troubles." The outsider is Ian, a man who participated in a brutal act that upended Jimmy's life 40 years ago and who has now arranged to meet him at the bar in an effort to make amends.

This is the kind of heavy-duty stuff I usually love and the production has come from Ireland's prestigious The Abbey Theatre with its original cast intact (click here to read about the transfer). But that's where the problems actually began for me. The actors' accents are so authentic that it took a good 20 minutes for my ears to adjust and the show only runs for 75 minutes.

And each word said really matters because playwright Owen McCafferty is probing the lingering damage that such conflicts inflict on all sides. Jimmy and Ian are given equal time to expose their wounds and, under Jimmy Fay's taut direction, the actors playing them are terrific.

Patrick O'Kane is frighteningly fierce as Jimmy, downing one pint of beer after another and determined to hang on to his anger because it's his sole remaining link to what might have been. Meanwhile Declan Conlon's Ian is a man haunted by his past deed but still capable of tapping into the rage that fueled it.

Most reviewers have lauded the play, with many tying it to today's versions of the Troubles, whether they be in Brussels or Baltimore. But there's such a static quality to the back and forth in Quietly that I couldn't help wishing that it had made a little more noise.