Why "3C" Barely Rates a Grade of D from Me 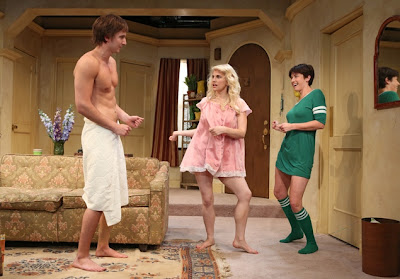 Judging by all the honors he’s already racked up, the playwright David Adjmi has plenty of fans and doesn’t need me.  His bio boasts that he’s won a Guggenheim Fellowship, The Whiting Writers’ Award and the Steinberg Playwright Award, among other prizes, and he even made New York Magazine’s "Top Ten in Culture" list for 2011.

On top of all that, Adjmi is also an alum of my alma mater, Sarah Lawrence College (although we graduated years apart and have never met) and he’s the friend of a good friend of mine, who chided me for not having seen Stunning, Adjmi’s play about Brooklyn’s Syrian-Jewish community, which had a sold-out run back in 2009.  So I was obviously eager to see 3C, Adjmi’s dark comedy which opened last week at the Rattlestick Playwrights Theater.

But now, having seen it, I’m at a loss for what to say, except to repeat that it’s a good thing that Adjmi doesn’t need my approbation.  Because 3C doesn’t work for me in any way.

The play is a riff on the old ‘70s sitcom, “Three’s Company,” in which a guy pretended to be gay so that he could split the rent on an apartment with two female roommates (an airhead blonde and a sensible brunette). The supporting characters here includes their lecherous landlord, his batty wife and a macho-man neighbor.

What seems to tie them all together are their dysfunctional attitudes toward sex.  The blonde is a nympho who will screw anything in sight. The brunette is a prude who worries that people will think she is a lesbian. The guys seem to be in various stages of the closet.  And the landlord is a dirty-old man whose actions and comments are meant to be unsettling— and really are.

The play made me squirm. Watching a man stick his hand down the pants of an unwilling woman or listening to vile homophobic jokes will do that. But 3C never makes it clear why it's showing these things. It’s certainly no longer a revelation that sitcoms are shallow or that people can have delusional sex lives.

The jokes in 3C (some groaners, some grotesque) aren't funny enough to sustain it as a comedy.  Meanwhile, the perversities in which it traffics suggest that it wants to be taken seriously. What results is a muddle.

Call me old-fashioned but I think a play, even one with absurdist pretensions, should convey some idea of why the themes it deals with matter.  When it doesn’t, it runs the risk of coming off, as this one does, as being merely gratuitous.

It also leaves very little for the actors, or for director Jackson Gay, to work with, even though everyone works hard. Too hard. Poor Jake Silbermann, who plays the male roommate, makes his entrance in the nude and spends much of the rest of the play being hit in the face.

The design team comes off better.  Scenic designer John McDermott has created an archetypal bland livingroom that would fit on almost any ‘70s sitcom set. Costume designer Oana Botez has lots of fun with the polyester shirts and bell-bottom pants from that period. And sound designer Matt Tierney has put together an amusing mixed tape of disco music from the era.

But the production missteps here too. It brings in Deney Terrio, the guy who taught John Travolta how to dance for “Saturday Night Fever,” to choreograph a series of numbers.  But those dances stop the action cold as the characters flail about the stage for far longer than seems warranted. Afterward, over a far more agreeable dinner at the nearby Waverly Inn, my husband K and I debated whether the actors had been directed to dance badly or were simply bad dancers.

Some audience members at the performance we attended applauded the dancing and laughed uproariously at the other antics as well but the fact that the claqueurs (friends of the actors? family of the playwright? suborned interns?) were seated together in just one part of the small theater only underscored how lame the whole thing was.