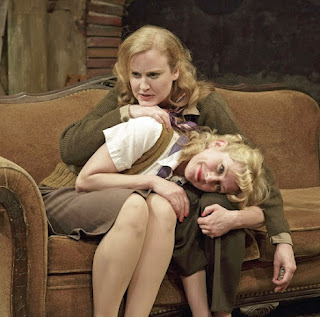 At some point, almost every frequent theatergoer has probably thought “I should write a play.”  Unlike most of us, journalists Martha Gellhorn and Virginia Cowles went ahead and wrote one.  The result is the romantic comedy Love Goes to Press that is playing at the Mint Theater Company through July 22.

The Mint, as theater fanatics know, specializes in works by playwrights who have been forgotten and those of well-known writers that have been overlooked. Gellhorn, the best known of the play’s two writers, falls into the latter category.

Although a legendary war correspondent who covered conflicts ranging from the Spanish Civil War in 1936 to the U.S. Invasion of Panama in 1989, she is probably still best known as Ernest Hemingway’s third wife. And while she published 17 books and scores of articles,  Love Goes to Press is her only play and hasn't been done in 65 years.

It was a hit when it opened in London in 1946 but a Broadway production the following January lasted just five performances. The New York Times' Brooks Atkinson dismissed it as "a fairly routine story about affairs of the heart that need not detain you this morning."

The plot, which borrows liberally from its authors’ lives, centers on two intrepid female reporters covering World War II. Annabelle (Gellhorn’s surrogate) and Jane (the substitute for Cowles who was also an accomplished war correspondent) are old buddies who turn up at a press encampment near the Italian front.

With sisterly support from one another, they scheme how to get closer to the action so that each can report the big story she's pursuing. At the same time, Jane finds herself dealing with romantic overtures from the British pr officer who runs the camp but believes a woman’s place should be in the home. And Annabelle has to contend with the Hemingway stand-in who is her ex-husband, double-dealing rival who uses dirty tricks to beat her on stories and the guy she still loves.

Gellhorn and Cowles wrote their play as a lark, telling themselves that they could sell it to the movies and set up an annuity for their old age. They threw it together in a few days and there is a kind of slapdash quality to Love Goes to Press. Still, it’s great to see a war story where the gals get to be the swashbucklers who outwit their male competitors and break hearts in the process.

The design team has paid excellent attention to period detail and special kudos must go to Jane Shaw’s sound design. But, alas, the rest of the production isn't as tip-top. The direction is indecisive and the acting is uneven. Still, everyone appears to be having fun.  And you may too, particularly if you read up on Gellhorn’s backstory before you go.

It may also amuse Mint regulars to see that Annabelle is played by Heidi Armbruster, who played another Gellhorn-inspired character in The Fifth Column, Hemingway's only play, which the Mint produced back in 2008 (click here to read my review of that one). It undoubtedly would amuse Gellhorn to know that, even with its faults, her play is better than his.