Why "Death of a Salesman" Will Never Die 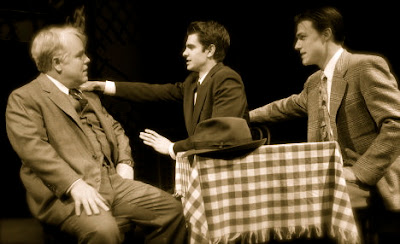 My friend Doug came to New York last month to celebrate his birthday with some fellow theater lovers, including my buddy Bill and me.  Sometime during the evening, well into our cups, we all started debating which play is truly the Great American Play.

It’s hard to argue against any of those choices.  But I did.  Because for me, standing slightly above all of them is Arthur Miller’s Death of a Salesman.  No play wrestles more affectingly with not only the American Dream of getting ahead but the American longing to be liked, or as the play’s tragic hero Willy Loman might say, to be “well liked.”

Miller’s masterpiece, which mixes poetry (there are lines in the play as lyrical as any ever written for the stage) with a flint-eyed look at the quiet desperation of mid-century Americans that resonates deeply in our own unstable times, is now being revived in a much-acclaimed production at the Ethel Barrymore Theatre through June 2.

It’s a high-wattage production, directed by Mike Nichols, who has said that seeing the original 1949 production was a seminal moment in his life (click here to read one of the many interviews he’s given about that).

And Nichols has paid tribute to the memory of that experience with the wonderful decision to use the impressionistic set that the great Jo Mielziner designed for the original production and the moody interstitial music that the equally great Alex North composed for the play under the direction of the supremely great Elia Kazan.

The roles of the down-on-his-luck title character, his long-suffering wife Linda and their hapless grown sons Biff and Happy who all come together in the family’s small Brooklyn home on what will be the last day of Willy’s life provide big shoes for actors to fill. And several of the fits are slightly off in this production.

Philip Seymour Hoffman stands the most uneasily in Willy’s brogues. Although he is one of the most emotionally honest actors I’ve ever seen on screen, I’ve rarely believed Hoffman’s stage performances, which have veered towards the self-conscious as Konstantin in The Seagull, Jamie in Long Day’s Journey into Night, and a listless Iago in the Public’s recent production of Othello.

Hoffman does get some things right as Willy—the downtrodden gait, the bewilderment at life’s disappointments—but it’s hard to believe that his Willy was ever the powerhouse who single-handedly opened up the New England territory for the company that’s now ready to let him go.

Linda Emond is more comfortable on stage but her Linda is so strong and capable that it’s hard to believe that she would have put up with Willy or the boys for all those years and far easier to think that she would have taken a correspondence course, got herself a job as a secretary and left them behind as the she moved into a nice little studio apartment in the East ‘50s along with other career gals of the time.

Finn Wittrock, a recent Juilliard grad who is making his Broadway debut, does nice work as the second-string son Happy (click here to read an interview with him) but the critics and nominators for most of the big theater awards, including the Tonys, have singled out Andrew Garfield, the young movie actor (he's taking over the Spider-Man franchise this summer) who's also making his Broadway debut in the role of the family's tarnished golden boy Biff.

It was hard for me to imagine Garfield as either the football hero son for whom Willie had such big dreams or the has-been roustabout that Biff has become. Still, he gives an intense performance that clearly moves people.  And I was moved too, although I wish Garfield, who is conservatory trained, had relied a little more technique to help ground his histrionics.

But no matter.  It’s Miller play that’s the thing.  And it remains great. And will so as long as there are those of us in the 99 percent.

Labels: Death of a Salesman

This was my first time seeing Death of a Salesman onstage and I enjoyed it and I'm glad I had the experience. Although it may be one of those plays that's so devastating, I don't know whether I want to see it again.

I liked Philip Seymour Hoffman although I've heard that criticism, that he doesn't do the exuberance as well as the dejection. I did believe him in both. Andrew Garfield didn't seem right physically but I thought he was effective in the flashbacks as a teenager.

I'm also glad I got to see you and Bill and I'm glad we had that discussion. It made me think about what makes an American play "American." Some of the elements that I thought about in connection with Salesman were: Willy's optimism, the way in which we're defined by our jobs and the outsized role that sports plays in our society.

Thanks for commenting, Esther. I hope you will see Death of a Salesman again. I think this production may be the fifth one I've seen and it's moved me and shown me new things each time.