"Brief Encounter": The Second Time Around 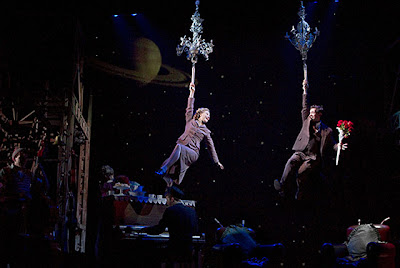 Reviews for the production of Brief Encounter that recently opened at the Roundabout Theatre Company’s Studio 54 have been mostly rapturous (click here to read the raves—and a few pans too).  The production, which I saw during its sold-out run at St. Ann’s Warehouse last year, was my favorite show of all the ones I saw in 2009 (click here to read my review).  So I don’t know why I wasn’t as thrilled as I expected to be when I saw the show again with my husband K.
I was still charmed by the inventive theatricality (a delightful mashup of vaudeville, videos, puppetry and circus skills) that director Emma Rice and her colleagues at Britain’s Kneehigh Theatre use to retell the classic 1945 movie about two middle-aged married people who meet and fall in love in a British train station. The cast—largely in tact from the run at St. Ann’s—is still wonderful (click here to read about the lone American who has joined them). And there are still moments when the show makes me swoon with pleasure.
Yet, I have to confess that some of the magic was missing.
I know my disillusionment wasn’t caused by any thought that the show mocked  the movie and the original Noel Coward play on which it was based.  Which is what some critics—including John Simon and the guys who do the This Week on Broadway podcast—think.  In fact, I think the naysayers are totally wrong and that the show reveres the movie and the world that inspired it.
Maybe it was the venue that made the show feel less special for me this time. I had worried about that when I heard it was coming to Broadway. Over the years, Kneehigh has presented its shows in abandoned mines, deserted factories, vacant barns and other off-beat locations that showcase the company's unconventionality (click here to read about the company’s past productions).
The funkiness of St. Ann’s' repurposed warehouse provided the perfect environment for this unique show in which the action sometimes flows into the audience. Studio 54 seemed a good choice too.  But the band that plays before the show—and sets the mood for it—got lost in the crowd there. The intimacy suffered too.
Maybe the mild letdown I felt also reflected the fact neither my husband K nor my theatergoing buddy Bill were taken with the show.  “I kept thinking, what’s the point,” Bill told me.
But maybe it’s just that you can’t experience the intensity of that rush of emotion that comes when you first fall in love.  It’s that intensity that Brief Encounter celebrates.  And, despite any reservations I might have, it still does it better than any other show in town.