Smart Gay History with "The Pride" and "Yank!" 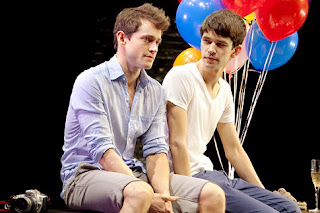 February is supposed to be black history month.  But over the past few weeks, theater in New York has seemed obsessed with gay history, particularly the period from the late-‘40s to the mid-‘60s when, as Charles Kaiser argues in his seminal book “The Gay Metropolis,” homosexuals who had once felt isolated discovered legions of others like themselves during World War II and began to dream of—and in some cases to fight for—a society in which they would be treated the same as anyone else.

The stories of that time are brought to vivid life in The Temperamentals,  the moving docu-drama about the founding of the first gay rights organization in the U.S. that recently moved to an open-ended run at New World Stages (click here to read my review); The Boys in the Band, Mart Crowley’s pioneering look at gay life in pre-Stonewall Manhattan, currently being revived in a site-specific Transport Group production that has just been extended to March 28; and in two fascinating new shows that have opened over the past couple of weeks: the drama The Pride and the musical Yank!

The Pride, which MCC Theater is presenting at the Lucille Lortel Theatre down in the Village, is a wonderfully theatrical British import that juxtaposes the experiences of gay men in scenes that alternate between 1958 and 2008.  The main characters are called by the same names in both time periods but the lives they lead are vastly different. In the earlier period, the men are forced to hide their sexuality and their love for one another, at times even from themselves. Their modern counterparts live openly and celebrate themselves in gay pride parades but struggle with issues of love and commitment.

Playwright Alexi Kaye Campbell may have overworked the contrasts (nearly all the gay men I know are in loving long-term relationships or want them as much as my hetero friends do) but that doesn’t make his play any less affecting, particularly as directed by Joe Mantello and performed by the rising movie stars Hugh Dancy and Ben Whishaw, equally brilliant as the men in both eras and superbly supported by Andrea Riseborough who fully realizes the two very different woman in their lives and Adam James as three characters, all of whom he plays with distinctive panache. (Click here to watch a video in which Campbell and the cast members discuss the play).

Some audience members who attended previews—including my pal Bill—were initially confused by the time shifting. Bill actually went back to see the show and emailed me that he he now appreciates it as much as I do. The 1958 scenes, which have the advantage of distance and an inherent drama, are particularly touching. The scene that opens the second act is, by itself, worth the ticket price. If you’re under 30, you can get one for just $20 bucks by clicking here.

Yank!, which is playing at York Theatre through March 21, is an unabashedly more simple and sentimental show.  Written by the brothers Joseph and David Zellnik, it’s one of those they-don’t-make-them-like-they-used-to musical romances, right down to the Agnes de Mille-style dream ballet in the second act, except that this time the lovers are two men.

The main character Stu is a young soldier during World War II, who comes out during basic training and falls in love with a more closeted member of his squad. The score is a pastiche of 1940s music but, although World War II probably ended before the Zellnik’s parents were even born, the brothers have a good ear for that era and some of their songs, particularly the love ballads, sound as though they might actually have come from the Hit Parade of that time. (Click here to read an interview the brothers did with my fellow blogger Patrick Lee).

Stu is played with all-out charm by Bobby Steggert, who recently won raves for his performance as Mother’s Younger Brother in the revival of Ragtime that closed last month, and he pairs perfectly Ivan Hernandez, who brings brooding good looks and a virile baritone to the part of Stu’s lover Mitch. Nancy Anderson, the only woman in the show (there aren’t lots of female parts in these gay plays and as the New York Post critic Elisabeth Vincentelli has pointed out—click here to read it—the lesbian experience is largely missing from these staged histories) but Anderson would standout any way for her game turn in a wide variety of roles.
But I, and judging by the applause, the rest of the audience at the performance I attended, was particularly won over by Jeffry Denman, who not only plays Stu’s flamboyant mentor at the military magazine "Yank" where they both end up working (yes, I know, you thought the title meant something else) but he also choreographed the show. Denman, who’s appeared in a slew of Broadway shows and Encores! productions, is an old-fashioned song-and-dance guy and he always looks happiest when he’s doing a tap routine so he’s included a few in the show and they’re terrific. The entertainment even continues in the lobby, where real WWII-era copies of “Yank’ decorate the walls.
Yet I have to confess that the most memorable thing about seeing Yank! for me was the 45 minutes I spent stuck in the elevator at Saint Peter’s Church where the show is playing in its basement theater.  Firemen had to be called to rescue the nine of us who were trapped and they had to lower a ladder through the roof so that we could climb out and then jump from the top of the elevator car to the landing. The York folks were great and actually held the show for us. While we waited for the firemen to get there, one of the men who works at the church regaled the rest of us with stories about how the elevator breaks down fairly regularly. 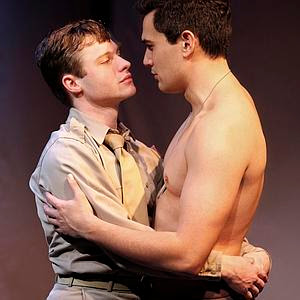 So here’s what I've learned from my history lessons over the past couple of weeks:  people who love theater that is as socially-conscious as it is entertaining should  go see both The Pride and Yank!  But if they opt for the musical, they definitely should take the stairs.

I just got in from "Yank!" this afternoon. Interesting show. Flawed, but compelling in my estimation (I would cut the ballet and maybe 10-15 minutes in the first act).

Thought you would be amused to know that they were only letting 6 people on the elevator at a time this afternoon, citing that previous incident. So it looks like they are trying to prevent an encore!

Great insight into the overall picture of gay theatre, which seems to really be thriving these days.

I saw Yank yesterday, and left feeling great - I'll blog a review for everyone on Tuesday.

But what is hilarious to me is that you had that elevator experience, as my "story" has to do with the stairs and the older gentlemen who insisted on taking them and then had to be carried up after getting stuck halfway (there are several flights) with shortness of breath and dizziness. I'm thinking it was good thing we were in a chuch basement!

Thanks for your comments, JK and Kevin. I love both your stories about how the York folks are trying to deal with getting people down to and up from the theater. It's a dilemma: they've got a balky elevator and killer stairs. But I'm even more delighted that you both liked Yank! I really think it deserves a longer life. Cheers, jan