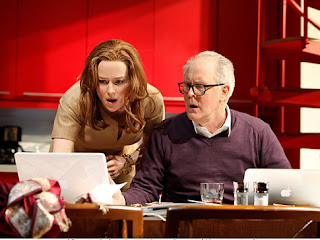 Here’s my dilemma. I want to applaud good actors for taking risks and good theater companies for supporting new works. But I can’t help feeling cranky when the attempt fizzles. And that, alas, is precisely what happens with Mr. & Mrs. Fitch, the new comedy that opened at Second Stage Theatre on Monday night.

The play, a two-hander, is about a married pair of gossip columnists who are finding it harder and harder to dig up scoops in our celebrity-saturated society where the famous announce their indiscretions on Twitter or hold press conferences to apologize for them.  The subject would seem to be perfect for Douglas Carter Beane, who has shown himself to be a master of both highbrow and lowbrow satire with such works as As Bees in Honey Drown, The Little Dog Laughed and the book for Xanadu.

This time out, however, Beane’s observations aren’t as fresh and his jokes aren’t so funny.  Most of the reviews I’ve seen have quoted the quip “You know, theater, that thing that movie people do when they want to announce they’re available for television.” It does get one of the evening’s biggest laughs but it also sounds as though it were a not-quite-good-enough line that got dropped from The Little Dog Laughed.

The agonies of desperate columnists might have worked well as a sketch for “Saturday Night Live” but there simply isn’t enough here to fill out the plays’s one hour and 50 minutes running time.  Or for the actors to flesh out real characters. Still, they try. John Lithgow, who, as fans of his old sitcom “3rd Rock From the Sun” know, can and will do anything for a laugh, pulls out all his tricks—contorted facial expressions, droll vocal inflections, rubbery-limbed dances—all to little avail.  It’s even tougher for Jennifer Ehle. She's a superb dramatic actress, as two Tonys attest, but playing funny doesn’t come naturally for her. Ehle, like Lithgow, is too talented and too smart to be out-and-out bad but you can see her straining to be just O.K.

The technical crew is off-kilter too. Scott Ellis directs everything at a high pitch. After a while, that simply becomes shrill. Set designer Allen Moyer, who apparently has never been in the home of a working journalist, has designed a duplex apartment for the Fitches that is fabulous in both the sublime and ridiculous senses of the word. Jeff Mahshie’s costumes are snazzy but don’t seemed designed with the script’s fast changes, or Ehle's elegant beauty, in mind.
I still think artists should be able to experiment.  But I also wish that ticket-buying audiences didn't have to pay the price for it.