The Exhilarations of "Speed-the-Plow" 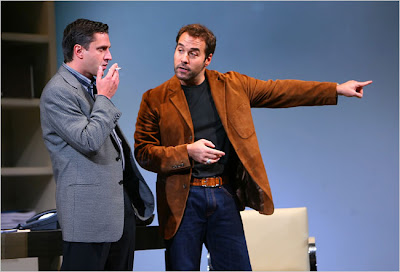 [Dec. 20 Update: Jeremy Piven pulled out of the production this week and people can’t stop buzzing about. My thoughts are below in the comments in response to a reader’s question.]

Serious theater seems to have become a contact sport this season. The opening of Fifty Words, Michael Weller’s new off-Broadway play about marital discord, had to be postponed because its stars Norbert Leo Butz and Elizabeth Marvel injured themselves during their onstage fights during previews. Uptown at the Gerald Schoenfeld Theatre, John Lithgow and Patrick Wilson go at one another so vigorously in the climactic confrontation in Arthur Miller’s All My Sons that I began to wonder if the 63-year old Lithgow might have to put in for workers’ compensation by the end of the run. And Raúl Esparza and Jeremy Piven battled so intensely at the performance of David Mamet’s Speed-the-Plow I attended, that it looked as though Piven’s nose actually began to bleed after their mano-a-mano clash.

Mamet, of course, is nearly always pugnacious. And his 90-minute morality play about two Hollywood studio execs on the make and the temporary secretary who comes between them sets up one of his typically rambunctious smackdowns. For years, however, Speed-the-Plow has been known as the Madonna play because the pop star made her stage debut in the original production that opened on Broadway in 1988.

I went to the opening night of that production because a friend worked at Lincoln Center, which was producing the show, and called at the last minute to say they needed people to fill the seats in the top balcony of the Royale Theatre, now called the Bernard B. Jacobs Theatre, but I don’t remember much about Madonna’s performance, except that she seemed mousy. But I suppose almost anyone would have seemed so when going up against such powerhouses as her co-stars Joe Mantegna and Ron Silver, who would win a Tony for his work in the show.

The producers of the revival that opened earlier this month have also tried to bring a little Hollywood glitz to their production. While Esparza, who burrows into Silver’s role as the most desperate of the two men, is a Broadway baby, Piven, who takes on Mantegna’s role of a newly-promoted studio chief, has gained his fame (and an Emmy) as the manic agent Ari Gold in the HBO series “Entourage.” And Elisabeth Moss, who plays the secretary, is one of the stars of the currently hot AMC series “Mad Men.” But Piven grew up in a family of stage people (click here to read an interview he gave the British weekly OK!) and Moss, the daughter of professional musicians, got her first professional acting job when she was eight and made her New York theater debut in 2002 in a production of Richard Nelson's Franny's Way (click here to read a Wall Street Journal interview with her). In short, all three know what they’re doing.

Although we didn’t go together, my pal Bill happened to see the same performance and he was knocked out by Piven. I thought Esparza walked away with the show. They both deliver Mamet’s trademark rat-ta-tat-tat dialog as though it were their native tongue. And while Moss has the less flashy and more difficult role (it’s now a cliché to say that Mamet doesn’t write good roles for women but there’s a reason clichés become clichés) she still squeezes a good deal of juice from it. Kudos too to director Neil Pepe, the artistic director of the Mamet-founded Atlantic Theater Company who sets a clear and exhilarating path for his actors to follow, and set designer Scott Pask who places the action in rooms that are as superficially sleek and thoroughly sterile as the people who inhabit them.

Speed-the-Plow may not be a heavyweight show like The Seagull or August: Osage County but it still packs a punch. Plus pound-for-pound, it delivers more laughs.

Any thoughts on the Strange and fishy excuse for Jeremy leaving the show. Sounds bogus to me.

Hey Anonymous, thanks for asking about the Piven mess. You’re certainly not the only one who doesn’t believe his mercury excuse. I don’t know what to think. Piven comes from a theatrical family and I’d like to believe that responsibility towards one’s work and one’s fellow actors is so inbred in him that he’d have to be near death’s door before walking out on a show, particularly when so many people bought tickets specifically because they want to see the guy from TV’s “Entourage” on stage. But, as I noted in my latest “Tweet between Posts” everyone with even the remotest connection to, or interest in, Broadway is talking about this and the folks at Gawker and Broadway columnist Michael Riedel have some of the juiciest gossip.

Here, Gawker digs into the background of the doctor who wrote the medical excuse note: http://gawker.com/5113688/meet-mercury+poisoned-jeremy-pivens-fishy-celebrity-doctor

And Riedel’s reporting suggests that there is, indeed, no love lost between the co-stars: http://www.nypost.com/seven/12192008/news/regionalnews/manhattan/pivens_fish_tale_begins_to_stink_144937.htm

Personally, I’m pumped by the idea of having Norbert Leo Butz and William H. Macy take over Piven’s role of Bobby Gould in the play and am trying to figure out how I can get back to see at least one of them.