Celebrating Even Making it to Awards Season 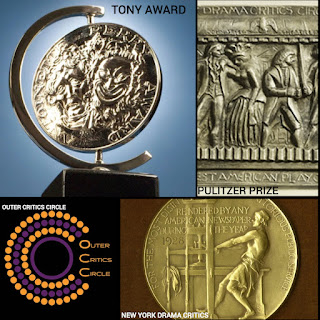 It may seem strange for a theater lover—and hip-hop know-nothing—like me to be quoting the rapper Drake but his self-congratulatory lyrics “Started from the bottom, now we're here” seem particularly apt at this theatrical moment. After all, concerns about the spread of the coronavirus had closed theaters everywhere at this time last year but now, we're here, in the awards phase celebrating a full New York theater season.

Of course, there have been bumps along the way. Broadway shows opened and closed and opened again as infection rates in the city ebbed, surged, wavered. Performances were canceled when stars like Hugh Jackman, Patti LuPone, Sarah Jessica Parker and Daniel Craig tested positive for the virus. But, thanks to having been vaccinated, they all returned relatively quickly to their productions, even though the Tonys had to extend their deadline so that nominators would be able to see all the shows and all the contending performers.

Meanwhile, tourists, the lifeblood of Broadway, have been slow to return and the city’s official marketing organization is predicting that visitors to New York will be down about 15% from the pre-pandemic levels of 2019. And even some locals have been skittish about seeing shows, including those off-Broadway.

All of that has caused premature closings, even of touted shows. The much-praised revival of Nzotake Shange’s for colored girls who have considered suicide/when the rainbow is enuf announced that it would close next week, three months ahead of schedule, before an online campaign won it a two-week reprieve until June 5. The musical Mrs. Doubtfire is unlikely to be so lucky; after getting just one Tony nomination (for Rob McClure's terrific lead performance) its producers said they will bring down the curtain on May 29.

On the other hand, people seem happy to pay premium prices to see Jackman in The Music Man, Craig in Macbeth, Parker and her also-starry husband Matthew Broderick in Plaza Suite and Beanie Feldstein headlining Broadway’s first revival of Funny Girl in 55 years, even though those four shows have drawn mixed reviews.

So the awards this year will have been particularly hard won and may be even more cherished than usual. The Tony nominators tacitly acknowledged that this week when they gave nods to 29 of the 34 shows that opened between Aug. 1, 2021 and May 4, 2022. Even Diana, the much-derided musical about the late princess that ran for just 34 performance, got a nod for its costumes.

But the biggest bragging rights went to the musical A Strange Loop, which lead the pack with 11 nominations although it was closely followed with 10 each by Paradise Square and MJ, the musical about Michael Jackson. On the play side, The Lehman Trilogy boasted eight nominations, including one for each of its three actors. All the winners will be announced at the ceremony scheduled for June 12. You can find—and debate—the entire list of nominees by clicking here.

Of course the Tonys aren’t the only honors that will be given out over the next few weeks. It can be difficult to keep score because the various awards groups have different qualifying periods. On Monday the Pulitzer Prize committee, which uses a calendar year and recognized A Strange Loop in 2021, gave its award to Fat Ham, a new twist on the Hamlet story by James Ijames that was streamed by Philadelphia’s Wilma Theater last year and just started previews for a May 26 opening at The Public Theater. You can read more about it and about the two semi-finalists by clicking here.

A couple of days later the New York Drama Critics’ Circle gave its Best Play prize to Samuel D. Hunter’s A Case for the Existence of God, a fantastic play that opened last week at Playwrights Horizons (click here to see my review). It also named Kimberly Akimbo, David Lindsay-Abaire’s adaptation of his 2003 play with a score by Jeanine Tesori, as Best Musical (click here for my thoughts on that one). The musical, which had a brief run at the Atlantic Theatre, is scheduled to open on Broadway in November and you can see the impressive list of runners-up for best play by clicking here.

There’s even more to come. The Drama Desk, which recognizes Broadway, off-Broadway and off-off-Broadway productions, was supposed to announce its nominations on May 2 but pushed them back to this coming Monday.  A day later, the Outer Critics Circle, on whose executive committee I’m proud to serve, will announce our winners for the 2021-2022 season. In the meantime, you can check out the list of our nominees by clicking here.

And this Sunday, I’m going to join my BroadwayRadio colleagues James Marino, Peter Filichia and Michael Portantiere to discuss all of this and more on this week’s episode of This Week on Broadway, which you should be able to find here.