Some Old-Fashioned Fun with "The Music Man," "MJ The Musical" and "Plaza Suite" 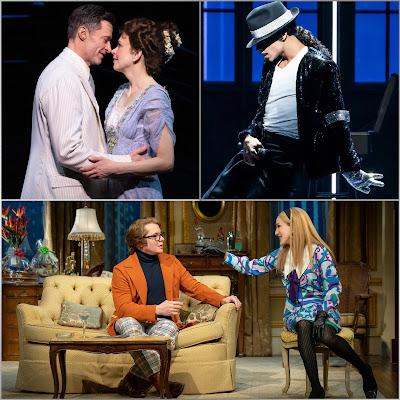 Here’s the dilemma: reviews are usually written by people who see anywhere between 200 and 300 shows a year but the people who read those reviews may see only two or three shows a year, often saving up to see them. So you can understand how those groups might have differing ideas about what makes for a satisfying show.

The critics weren’t crazy about the new revival of The Music Man, finding it to be miscast with leads who are too old for their roles, too eager to please the audience and not up to singing the score. But people are flocking to it because they want to see the much beloved performers Hugh Jackman and Sutton Foster onstage in any lead roles (click here to see an interview with him).

My college roommate who lives in California bought her tickets before previews even began. And she clearly isn’t the only one excited about the show. The gross ticket sales for The Music Man are dwarfing those of all other Broadway shows including such longtime big draws as Hamilton and The Lion King.

There’s been a similar parting of opinion about MJ The Musical, which has terrific turns from a trio of performers playing the title MJ, Michael Jackson, at various stages in his life but whose real star is the songbook of Jackson’s ever-popular hits.

And there's also a schism over Plaza Suite, the revival of Neil Simon’s 1968 comedy about three couples that opened this week starring the famous real-life married couple Matthew Broderick and Sarah Jessica Parker (click here for an interview with them).

The critics were ho-hum about those shows too; while regular theatergoers could barely contain their delight. “God, that was fantastic,” a woman exclaimed to no one in particular as she jubilantly made her way out of the MJ performance I saw.

I get where the critics are coming from. They—we—see so much that they long for shows that push theater forward, be it in style or substance. But Meredith Wilson’s The Music Man, a story about a con artist whose plan to bilk some townsfolk is upended when he falls in love with the local librarian, is an old-fashioned show that glorifies a white-bread version of small-town America that can’t be rectified simply by colorblind casting the people in the town as this production does.

Plaza Suite shares a similar obsolescence problem. Sexual mores and gender roles have changed and what was titillating or funny back in the late ‘60s can come off as offensive or just lame today even when the performers are such seasoned—and hardworking—pros as Broderick and Parker.

MJ, which charts Jackson’s life from his breakout as the lead singer of The Jackson 5 in the 1970s to his reign as the King of Pop preparing for a worldwide tour in the early '90s, is certainly a contemporary story and the music, filled with such head-bopping hits as “Beat It,” “Billie Jean” and “Thriller,” remains irresistible.

But even though the show ends before the first public accusations of molesting children were made against him in 1993, Jackson was a complicated man and many critics have knocked the show and its book writer Lynn Nottage for failing to get inside his head to reveal what made him tick.

Yet I don’t think the people literally lining up to see these shows care about any of that. They just want to have a good time and to feel that they got their money’s worth. And I think all three shows deliver on those fronts (unless maybe you’re paying $700 for the premium seats at The Music Man or $600 for those at Plaza Suite). Because these are the kind of colorful, star-studded song-and-dance-and-have-a laugh shows that most people think of when they hear the words “a Broadway show.”

The dance numbers alone in The Music Man and MJ are worth the price of admission. And they’re performed by gifted, almost gravity-defying ensembles (click here to read an interview with Music Man’s choreographer Warren Carlyle and click here for one with MJ’s Christopher Wheeldon). Awards voters are going to have a tough time determining who should take home the award for choreography this year.

Meanwhile John Lee Beatty's gorgeous set and Jane Greenwood's witty costumes (not to mention the joy of seeing the married stars together onstage for the first time in 25 years) will give Plaza Suite ticket holders something to talk about with friends and neighbors when they get home.

This split between what the critics want (something that takes a risk) and what most real people want (a sure bet) has already set off a debate this season about whether every show needs to be serious or ground breaking or whether shows can just be fun (click here to read one of those back-and forths). My theatergoing tastes tend to lean toward the serious but right now, I’m going to be speak up for fun.

Even the Greeks who created modern theater knew that you need both. They required playwrights entering their annual competitions to submit three dramas plus what was known as a Satyr play. The latter were often bawdy and always funny works.  No cultural celebration was considered complete without one.

So we certainly should be able to make room for those kinds of “just entertaining” shows in this season. Besides, there’s more than one way for a show to be meaningful.

Sitting behind me and my niece Jennifer at the performance of MJ we saw were a father and his daughter who looked to be about 12. The dad clearly knew all the songs and during the intermission he shared stories about them with his kid who hung on to every word.

And who, be they comped critic or ticker buyer, wouldn't agree that such bonding is precisely the kind of thing that makes theater so meaningful for all of us.