A Solo "Christmas Carol" for A Solitary Time 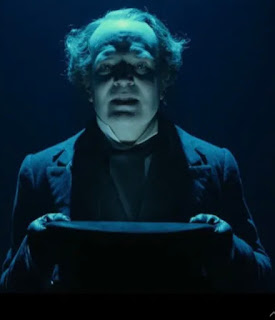 Christmas as we know it—the tree, the cards, the carol singing—began during the early Victorian age and perhaps no one popularized those now-familiar traditions more than did Charles Dickens with his 1843 novella “A Christmas Carol.” It famously tells the tale of the miserable and miserly Ebenezer Scrooge who is visited and reformed on Christmas Eve by three ghostly spirits. The book was an instant hit and staged adaptations immediately followed; by the next year there were at least eight different productions running in London.

Over the decades, zillions more versions have followed on both stage and screen, with Scrooge being portrayed by such diverse performers as Alastair Sim, George C. Scott,  Robert Guillaume, Jim Carrey, Susan Lucci, Vanessa Williams and the cartoon characters Donald Duck and Mr. Magoo.

Last year, Broadway hosted a production led by Campbell Scott in a British panto-style version of the play originally adapted by Jack Thorne and directed by Matthew Warchus for London’s The Old Vic Theatre, which is presenting a fully-staged streamed version this year, starting Dec. 12 (click here to read more about it).

The story of Scrooge, his poorly treated clerk Bob Cratchit and Bob’s crippled but generous-hearted son Tiny Tim is now a Christmas season perennial at both big and little theaters throughout the U.S. and the U.K. (click here to read how some theater companies are currently tweaking their versions in these pandemic times.)

But from the very start when Dickens himself performed staged readings of the story, some of the most popular productions have been one-person shows in which a sole actor performs the more than 50 characters in the narrative.

It’s hard to think of a contemporary actor more suited to that task than Jefferson Mays, a Tony Award winner for his performances in the one-man show I Am My Own Wife, in which he took on some 40 characters, and for the musical A Gentleman’s Guide to Love and Murder, in which he played 10 members of a highly eccentric (and hilarious) family.

And Mays is again wonderful in the streamed production of A Christmas Carol directed by Michael Arden, adapted by Arden, Mays and Mays’ wife Susan Lyons and filmed under Covid precautions in an empty theater in Upper Manhattan in October.

While they’ve hewed close to the original narrative and prose, the trio has leaned into the psychology and sociology of the piece, highlighting the correlation between the way a child is treated and the man he becomes and emphasizing the ways in which the poor can be permanently crippled by the disregard of those who have money and are intent only on having more. It’s a take that Dickens, himself a progressive reformer, would have appreciated.

A master showman himself, Dickens would also have applauded Mays' performance. Ever nimble, the actor morphs easily from one character to the next with just the twitch of an eyebrow or a change in the pitch of his voice. He hits all the poignant notes of the morality tale as Scrooge acknowledges his sins but he’s a particular delight in lighter scenes such as Scrooge’s memory of a party he attended in his youth that allow the actor to kick up his heels a bit and indulge the more antic side of his wit. The jig he does with himself as both Mr. and Mrs. Fezziwig is a treat in every way.

I just wish the rest of the production around him had been as dexterous. Too many of the choices distract from rather than enhance the presentation. I get that the low lighting helps set the slightly spooky mood that the story calls for but in this case, it also makes it hard to see what’s going on. Similarly, manipulating the sound of the ghosts’ voices made it hard to understand what they were saying.

And there was absolutely no need for the fuzzy video projections that play behind Mays at the party scene; his performance had already elegantly established the time and place. Meanwhile, the emo music by the pop-rock musician Sujfan Stevens not only seems anachronistic for the period but downright gloomy, even at the—177 year-old spoiler coming—happy ending.

Still, it’s hard to ruin A Christmas Carol and its moral of redemption through giving to and caring for others shines through. Tickets for this version of the tale, which will run online through Jan. 3, cost a hefty $50, plus fees that tack on another $7 (click here to get them) but the show can be viewed multiple times and part of the money will go to some 50 regional and community theaters across the country that are struggling because of the pandemic.

If that’s still too dear for your pocketbook, there are many other options, including an updated musical version called Estrella Scrooge: A Christmas Carol With A Twist produced by Abingdon Theatre Company, with tickets starting at $29.99 (click here for more information) and a streamed Primary Stages benefit reading of the Dickens' tale, directed by Theresa Rebeck and starring Raúl Esparza as Scrooge that will cost $100 for the live Dec. 16 performance but will be available for free from Dec. 17-20 (find out more about that by clicking here).

As Tiny Tim might say, God bless them everyone.