"A Soldier's Story" Flies Its Flag at Half-Mast 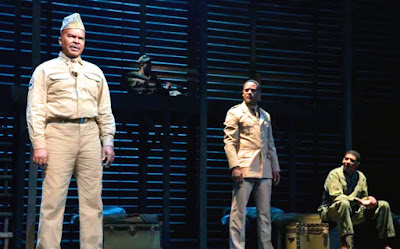 One of my best friends worked for the Negro Ensemble Company back in its heyday and so I got to see the original productions of such shows as Zooman and the Sign, The River Niger and the NEC’s most successful production, Charles Fuller’s Pulitzer Prize-winning A Soldier’s Story, which has now been revived by the Roundabout Theatre Company and is running at the American Airlines Theatre through March 25.

Set in the barracks of an all-black platoon stationed on a southern army base toward the end of World War II, A Soldier’s Story starts with the murder of the group's sergeant and the arrival of one of the military's few black officers who has been sent to investigate the crime.

On the surface the play unfolds like an episode of a network TV procedural with the questioning of witnesses, flashbacks that explore relevant relationships and some misdirection about who did the deed. But what won the play its Pulitzer was Fuller’s devastating meditation on the effects of systemic racism.

The original cast turned out to be special too. It included a young Denzel Washington and a young Samuel L. Jackson. But the performances that knocked me out back then and that I still remember vividly now were by Adolph Caesar as the murdered Sergeant Vernon C. Waters and Larry Riley as C.J. Memphis, one of the privates under Waters' command.

Caesar played Waters as a man desperate to show that African Americans could make good soldiers but unaware of how much white society’s belief in black inferiority had already infected him. That resulted in a  performance that was simultaneously gut-wrenching and heartbreaking.

Riley, on the other hand, played Memphis as a naive but sweet country boy who had a way with singing the blues and making friends that endeared him to the other guys in the unit—and to those of us in the audience as well.

Both actors left big shoes to fill and I’m sorry to say that the actors stepping into them in this revival, the first time the play has been done on Broadway, walk more lightly than I’d hoped.

That’s not at all the fault of the play, which offers as sharp a commentary about both institutionalized and internalized racism as it did when it debuted in 1981 and when it was turned into the Oscar-nominated film “ A Soldier’s Story” three years later. The problem now, I fear, rests in the direction by Kenny Leon.

This production is cooly intellectual rather than viscerally emotional. It focuses more on the look of things (the set is bo-ho chic and the men are buff) than on what the play is trying to say about the indignities and thwarted opportunities that segregation wrought during that pre-Civil Rights era.

Nor has Leon helped his actors distinguish the individuals in the barracks who represent the different ways black people in that time dealt with those burdens, from going-along-to get-along to barely containing the anger that would later erupt in the militancy of the ‘60s.

Instead, the men in this platoon are just a group of nice interchangeable guys and it was difficult to keep track of who was who. J. Alphonse Nicholson has shown himself to be a talented actor in other plays but his Memphis fails to stand out here, which undercuts the impact of his pivotal storyline.

David Alan Grier’s Sgt. Waters also misses the mark.  It’s not that Grier, who replaced Riley in the original production and had a different part in the movie version, isn’t a good and versatile actor but he’s also so innately genial that he can’t help diluting the self-loathing that’s supposed to fuel Waters.

The most effective performance comes from Blair Underwood, who plays the Howard University-educated attorney who has been sent to investigate the case.  Underwood, who says he drew on the experiences of growing up in a military family (click here to read more about that), quietly navigates the role of a man who has to walk the line between the blacks who view him with pride and the whites who view him with surly unease.

But Leon fussies up the rest of the production with gratuitous business like having the men appear shirtless as often as possible or including choreographed interludes in which they sing and engage in the syncopated drill-like moves practiced by black fraternities in their step competitions.

All of that is audience-plesing (the sight of Underwood’s six pack abs stops the show as women and men hoot and clap in delight) but the eye candy detracts from the play.

I'm willing to admit that I may be somewhat blinded by my memories of the original production but back then, all that was needed were Fuller's fine words, a cast of committed actors and the plain-spoken direction of the NEC's artistic director Douglas Turner Ward.

Still, the fact that this revival has been so well received by critics and audiences confirms that A Soldier's Play belongs in the canon of great American plays. And so I find myself in the strange position of being disappointed in a production but still believing that if you can, you ought to see it.