Some Must See Shows for the Spring Season

The best preview for the spring 2020 theater season I’ve seen was the one that my friend and fellow theater junkie Howard Sherman posted on his Facebook page a couple of weeks ago: 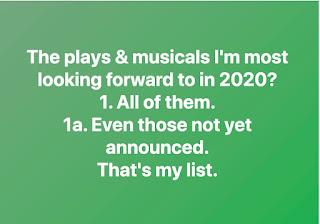 I can’t be as succinct (or maybe even as optimistic) as Howard but here are a dozen upcoming shows that I am champing at the bit to see over the next few months:

MEDEA
The Australian director Simon Stone had great success with his reworking of Federico García Lorca’s 1934 tragedy Yerma about a childless woman that played at the Park Avenue Armory two years ago. Now he’s taking on Euripides’ classic tragedy about a woman who commits the ultimate act of revenge against a cheating husband. To make it even more tempting, he’s recruited the real-life couple of Rose Byrne and Bobby Cannavale to star.
Running Jan. 12 to Feb. 23 at BAM

GRAND HORIZONS
Who wouldn’t want to see an ensemble composed of Jane Alexander, James Cromwell, Priscilla Lopez, Ashley Park and Michael Urie? And just as tantalizing is the fact that they’re appearing in the Broadway debut of Bess Wohl whose Small Mouth Sounds and Make Believe showed that she's a master at dissecting the intricacies of human relationships.
Opening Jan. 23 at Second Stage’s Helen Hayes Theater

BOB & CAROL & TED & ALICE
Sure, it's another movie adaptation but this musical reworking of Paul Mazurky’s 1969 comedy about two married couples trying to get in on the sexual revolution has a score by Duncan Sheik and I’m always up for seeing and hearing the latest by the composer of Spring Awakening.
Opening Feb. 4 in a The New Group production at The Pershing Square Signature Center

THE HOT WING KING
Signature Theatre has already announced an extension for this new show by Katori Hall and although I don’t know a lot about it, this comedy about a guy trying to win a culinary competition promises to be a welcomed reminder that plays about black and brown people don’t always have to deal with racial trauma.
Opening Feb. 11 in Signature Theatre’s  Alice Griffin Jewel Box Theatre

MACK & MABEL
Although this musical about the relationship between the silent film director Mack Sennett and his leading lady Mabel Normand only ran 66 performances when it originally opened in 1974, I’ve always wanted to see it and so I bought my ticket for the Encores! production as soon as they went on sale. I just wish the show’s composer Jerry Herman, who died Dec. 26, could be around to see what is said to be one of his favorite of his shows.
Running Feb. 19-23 at City Center

WEST SIDE STORY
Even friends who don’t go to the theater much have been asking me about the revival of this classic retelling of the Romeo and Juliet story with music by Leonard Bernstein, lyrics by Stephen Sondheim and a book by Arthur Laurents (and whose original productions was directed and choreographed by Jerome Robbins). I’m admittedly nervous about what the iconoclastic director Ivo van Hove might do with one of my all-time favorite musicals but there’s no way you could keep me away from seeing this one.
Opening Feb. 20 at the Broadway Theatre

CAMBODIAN ROCK BAND
I’ve loved the mix of the real and the mildly surreal in everything (The Hatmakers Wife and The Great Leap) I’ve seen by Lauren Yee and I’ve been looking forward to seeing this play that sets the story of a survivor of the Khmer Rouge’s Killing Fields to a score of rock music played by an onstage band.
Opening Feb. 24 in a Signature Theatre production at The Pershing Square Signature Center

DANA H
The always-intriguing playwright Lucas Hnath has already premiered one new play this season (The Thin Place at Playwrights Horizons) but this is his most personal work to date: a solo show based on the true experience of his mother, a hospital chaplain who was held captive for five months by a former mental patient. Plus it's starring one of my I’ll-see-her-in-anything faves, Deirdre O’Connell.
Opening Feb. 25 at the Vineyard Theatre

ENDLINGS
Issues of gender, ethnic identity and aging are catnip for me and I’m eager to see them examined in Celine Song’s meta play about a playwright struggling to write about the last of Korea’s traditional female deep sea divers in this production staged by the up-and-coming young female director Sammi Cannold.
Opening March 9 at New York Theatre Workshop

SIX
They’re calling this musical Britain’s Hamilton because it sets the real-life stories of the six wives of Henry VIII to a sung-through pop score filled with catchy songs and resonant points about the way women’s lives have been constricted throughout history. Just listening to the cast album has been a blast and I’ve already made a date with my Anglophilic niece to see the live production.
Opening March 12 at the Brooks Atkinson Theatre

THE MINUTES
My beloved husband K is notoriously picky about what he will see but he’s already put in his bid to see the new Tracy Letts comedy about a fractious city council meeting and I totally get why because the show will be directed by the Tony-winning Anna D. Shapiro and has a supporting cast that includes Blair Brown, K Todd Freeman, Armie Hammer, Jessie Mueller, Austin Pendleton and Letts himself.
Opening March 15 at the Cort Theatre


SANCTUARY CITY
It was originally scheduled for last season and so my appetite has been truly whet for this latest work by the Pulitzer Prize-winning playwright Martyna Majok which promises to offer another of her timely meditations on what it means to be an immigrant and marginalized in today’s America.
Opening March 24 at New York Theatre Workshop