"Seared" is Cooking on Almost All Burners 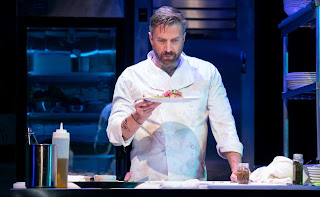 Sometimes you want a gourmet meal filled with rare or surprising ingredients. But sometimes you just want a big yummy bowl of macaroni and cheese. Seared, the latest play by Theresa Rebeck, is the latter. And to my surprise, I lapped it right up.

I say to my surprise because after having been disappointed by a string of Rebeck's previous plays, including Mauritius, The Understudy, Seminar, Dead Accounts and Bernhardt/Hamlet (she gets produced a lot), not to mention the mishmash of her theater-centric TV series ‘Smash,” I’d almost given up on her. But Seared, which is running in The Robert W. Wilson Space at MCC Theater through Dec. 15, seems to take itself less seriously than its predecessors and, perhaps consequently, is a lot more fun.

It opens in the cramped kitchen of a small restaurant in Brooklyn run by a temperamental chef named Harry and his anxious business partner Mike. New York magazine has just touted their restaurant for its seared scallops and reservations are pouring in from foodies eager to try the dish.

The problem is that Harry considers himself an artist and having now perfected the scallop recipe, he isn’t interested in cooking it anymore. At the same time, Mike, desperate to grow the business and turn a profit on the life savings he's invested in it, brings in Emily, a savvy restaurant consultant with powerful connections that can help them exploit their newfound fame.

This sets the stage for one of Rebeck’s favorite themes: the tug of war between art and commerce. But director Moritz von Stuelpnagel, who specializes in both high and low comedy, keeps the tone light and the pace quick, while still showcasing Rebeck’s snappy dialogue and theme-defining monologues.

The director also nearly manages to camouflage the shallowness of the play's characters. For although created by a woman and dressed in chic designer outfits, Emily is your standard-issue manic pixie dream girl, while Harry is your basic man-child.

But von Stuelpnagel’s masterstroke was getting Raúl Esparza to play Harry. For Esparza always projects an inherent cockiness laced with an endearing layer of vulnerability, qualities and that fit hand-in-glove with the volatile Harry (click here to read more about the actor).

Both actor and character also share a love of their crafts that is evident in the bravura silent scene that opens the second act and that was so terrific it drew a well-deserved ovation at the performance I attended.

The rest of the cast—David Mason as Mike, Krysta Rodriguez as Emily (click here to read more about her) and a very droll W.Tré Davis as the sole waiter Rodney—is cooking with gas too.

Meanwhile, scenic designer Tim Mackabee has created a fully-operational kitchen of such detailed verisimilitude (and expertly lit by David Weiner) that it actually becomes the essential fifth character in the show.

What you get when you add it all up is the theatrical equivalent of comfort food. But there's nothing wrong with that, particularly when it's as well done as Seared is.