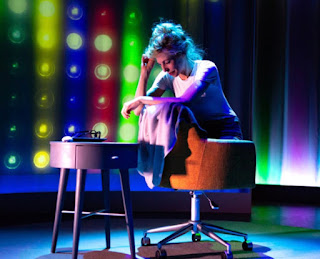 The producer Daryl Roth acquired a bank building near Union Square and converted it into an off-Broadway theater back in 1996 but I’ve only begun attending shows there recently. In its early years, Roth's eponymous theater tended to feature shows like De La Guarda and Fuerza Bruta, quasi-circus productions that seemed aimed at young people whose idea of entertainment was still defined by a mosh pit and lots of beer.

But in the past year, Roth seems to have switched the focus to other demographics. Last fall, she opened Gloria: A Life, a full-throttled tribute to the feminist Gloria Steinem that was catnip for baby boom women. And now ensconced in the theater’s smaller DR2 space is Accidentally Brave, Maddie Corman’s one-woman bio-show that seems destined to be just as enticing for that segment of Gen-X women who grew up believing that they actually could have it all.

For 20 years, the now 48-year-old Corman did seem to have it all. Although not a marquee name, she enjoyed a thriving acting career, appearing in scores of movies, TV series and a few plays. At the same time, she was happily married to Jace Alexander, the actor son of the actress Jane Alexander who eventually became a successful TV director.

They had three children, a big house in Westchester, lots of friends, great vacations, warm family traditions and the kind of picture-perfect life that people always seem to be boasting about on Facebook or in the pages of alumni magazines.

Then, as Corman says right at the beginning of her show, it all fell apart four years ago when police raided their home, seized the family computers and arrested her husband on charges of promoting child pornography. He later plead guilty. The remainder of the 90-minute show is Corman’s account of how she attempted to put her life back together.

Under Kristin Hanggi’s sharp direction, her storytelling is aided by projections of family photos, a few props and some sound effects. But mainly it’s just one small woman on a stage reliving the worst months of her life.

A recent New York Times story about the show (click here to read it) made me think it would be somehow icky or self-indulgent. But it isn’t. Corman has the quirky charm of a Beta girl determined to be everybody’s best friend and despite the woes she shares and the pain she still obviously bares, she’s fun to hang out with.

There’s virtually no suspense to the story she tells.  She says at the top that she’s still recovering and that she’s still with her husband. And she also makes it clear that she’s going to focus solely on her response to what happened, with only minimal references to what her husband actually did, why he did it or how her kids dealt with it.

Still, Corman is unflinchingly honest about the way she pinged between moments of anger at her husband, shame over the publicity his case drew, fear about becoming the family's sole breadwinner after he was fired from all his jobs and gratitude when people said and did kind things like keeping the kids for a weekend or gifting her a massage.

The only thing she doesn’t share is the identity of the famous woman she’s nicknamed the Angel, who served as a sounding board and Oprah-like life coach, bucking Corman up whenever she most despaired. I have my suspicions about who the mystery woman might be but since it’s just pure speculation, I’m following Corman's lead and keeping my guess to myself.

Going through it all at each performance seems to be cathartic for Corman. If you’re sitting close enough, you can see the tears welling up in her eyes. I couldn't help wondering what effect having their mom rehash the whole thing over and over again might be having on her now teen kids but she says they’re fine. We'll have to wait for their plays to know if that's true.

In the meantime, Corman also says she wants her story to serve as a morality tale. And it just might. Her life certainly isn’t typical.  And it isn’t monumental as Steinem’s is. But it is a model of feminine perseverance. And it seems quite at home in Roth’s theater and judging by the full house at the performance I attended, its' likely to settle in for a good stay.