"Cyprus Avenue" is a Dead-End Street 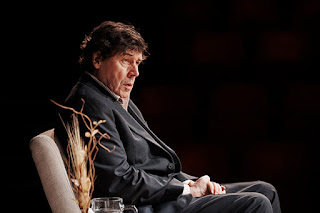 Edward Bond's drama Saved shocked London audiences in 1965 with its depiction of a group of disaffected young people stoning a baby to death. That harrowing scene set the bar for generations of British playwrights determined to show that they too were mad as hell at the world— and daring enough to say so.

Thus, we've had racism, rape and torture in Sarah Kane's Blasted, maiming and matricide in Martin McDonagh's A Behanding in Spokane and The Beauty Queen of Leenane, nihilism and murder in Simon Stephen's Punk Rock, and now the multiple atrocities committed in David Ireland's Cyprus Avenue, a co-production of Dublin's Abbey Theatre and London’s Royal Court Theatre that is scheduled to finish up its run at The Public Theater on July 29.

Directed by the Royal Court's artistic director Vicky Featherstone, Cyprus Avenue chronicles the disintegration of a middle-aged guy named Eric, who was born and bred in Northern Ireland but defiantly identifies as British and harbors a hatred of the IRA so deep that it distorts every interaction he has, including those with the members of his immediate family.

I gasped right along with everyone else in the audience as Eric committed one horrific act after another. And the great actor Stephen Rea's characteristically committed portrayal of Eric had me straining to understand how such a seeming everyman could end up so tragically wrong.

But I also left the theater feeling a bit queasy, partially because of the production's somewhat graphic violence but even more so because of my tacit complicity in accepting it as entertainment.

Let's face it, after 60 years of this kind of shock and awe, few new insights are being offered up. Instead, what we get is just the stage version of a slasher film masquerading as black comedy (and why do we continue to regard killing people as a laughing matter?) or absurdist commentary.

We're supposed to see this play as a cautionary tale about what happens when fundamentalist beliefs go too far. But Eric is presented as so deeply delusional (he actually uses a magic marker to draw a beard on the face of his infant granddaughter) that there's no real connection between his story and those of the real-life people who commit terrifying acts.

Cyprus Avenue unfolds in a series of Eric's conversations with his therapist, a Nigerian-British woman whom he calls a nigger. I know; I flinched at the word just as you probably did when you read it. And the comment is totally gratuitous, adding nothing to our understanding of what drives some people to hate. It's just there, like this play is, to say "look how daring I am."