"The Home Place" is Underfurnished 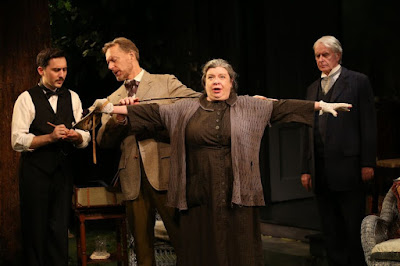 All the comments I overhead at the Irish Repertory Theatre Company's revival of Brian Friel's The Home Place seemed to be about the set. Decorated with prettily painted flats and lots of imitation greenery to simulate the fictional village of Ballybeg where Friel located so many of his plays, it is a nice set, especially for a company with a limited budget. Still, it might have gotten so much attention because it was hard to think of anything as complimentary to say about the rest of the production.

Back in 2007, the original production won London's Evening Standard Award but although the play deals with Friel's familiar themes of identity and oppression, be it on the basis of ethnicity as in Translations or gender as in Dancing at Lughnasa, this rendering of The Home Place seems unfocused.

The play's titular homestead is owned by Christopher Gore, an Anglo-Irishman who sees himself as a benevolent landlord but it's 1878 and he worries that his tenants will succumb to the growing demands for home rule that have caused locals in a nearby village to murder their squire.

It doesn't help that Gore is being visited by his arrogant cousin, a eugenicist who is conducting psuedoscientific tests on the townspeople in an effort to prove that the Irish are inferior to the British. And further complicating matters is the fact that the widowed Gore and his grown son David are both in love with their housekeeper Margaret, a local beauty who aspires to a better life than her neighbors.

The Home Place calls for a large cast, some appearing only in a scene or two, and the Irish Rep gets points for casting 11 actors instead of having some double as has become the custom for companies trying to stretch a dollar. The problem is that too few of those actors are up to the task of walking the fine line between grit and whimsy that defines so much of Friel's work.

And even some of the better actors are miscast. The lovely Rachel Pickup exudes grace, making it easy to see why the Gore men would be taken with her Margaret. But Margaret is not only torn between the father and son but between the town's social classes and Pickup's performance doesn't convey that inner turmoil. Nor does it get anywhere near the dramatic-rich question of whether Margaret is simply an opportunist trying to figure out the best deal for herself.

Meanwhile under Charlotte Moore's shaky direction (characters show little regard for where walls should be as they make their entrances and exits) several of the male actors make eccentric choices that undercut not only their characters but the narrative of the play. One mugs endlessly.

The Irish Rep has put on a Friel play almost every season and so it makes sense that it would want to mount this one, the last original work by Friel, who died two years ago at the age of 86. But alas, this production suggests that you can't always go home again.