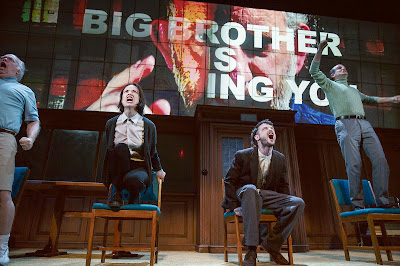 The producers of 1984 are marketing their show as though it were a horror movie. They've put out a warning that children under 13 will not be admitted (click here to read about that). And they trumpet all the articles about how people have fainted or vomited while watching some of its more gruesome scenes (click here to read more about that).

And indeed, the British directors Robert Icke and Duncan Macmillan, who also collaborated on this adaptation of George Orwell's classic dystopian novel, have incorporated lots of horror-house thrills: an ominous soundscape, glaring lights that suddenly snap on and off, screens that add to the sense of paranoia. Plus, there's plenty of bloody gore.

I just wish they'd also focused as much attention on the storytelling.

Most of us read "1984" at sometime in school and know that it's about a low-level bureaucrat named Winston Smith who lives under a totalitarian regime that continually rewrites history, constantly monitors its citizens through TV screens and severely punishes anyone who tries to have an independent thought. Winston becomes one of those rebels when he falls in love with a woman named Julia and enlists in a resistance movement that seeks to bring down the government.

Even folks who skipped their ninth grade reading assignment know the book's lexicon of Big Brother, newspeak and thought police. And the election of Donald Trump with its similar-sounding references to fake news and alternative facts has made the nearly 70-year-old novel a bestseller all over again.

Prescient, Icke and Macmillan first staged their play in London back in 2013 (click here to read about the genesis of the show). But apparently unhappy with Orwell's bleak ending, they bookend their version with scenes set in a future time in which the regime has been overthrown and people are looking back at the bad old days. Such optimism may be welcomed but it also undercuts much of the novel's true horror (and yes, I know Orwell included a similar coda but at least he left it for his appendix).

The use of screens and video projections, particularly in the scenes in which Winston and Julia find a hideaway where they believe they can be and say whatever they want, is also distancing. And so despite the production's stylish stagecraft, I ended up feeling too little for the plight of its protagonists—or for the possibility that we could become them.

Still, the acting is compelling, at least it is in the intense interrogation scenes that take up nearly a third of the show's 101-minute running time, that odd number of minutes being perhaps a too cutesy allusion to the book's dreaded torture chamber, Room 101.

The show, which is running at the newly—and beautifully—restored Hudson Theatre through Oct. 8, also has an odd playing schedule with 5 p.m. matinees and 9 p.m. evening performances and I have no idea how the young British actor Tom Sturridge is able to put himself through Winston's harrowing torture scenes twice in such a short span of time.

Meanwhile, Olivia Wilde, making her Broadway debut, is appropriately enigmatic as Julia. And Reed Birney is his usual excellent self as O'Brien, a higher-level party member who, at various times and in various ways, offers to help Winston.

But neither the weak storytelling nor the strong acting seemed to matter to some members of the audience the night I saw the show. More people than usual brought in drinks and checked phones during the performance, their screens flickering like fireflies in the dark. A few hooted in laughter during the torture scenes. But I suppose that's the kind of behavior you can expect when people equate a live drama with a horror flick.