The Misfortunes of "The Lucky One" 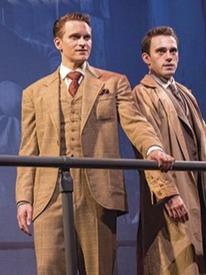 Most people know A.A. Milne as the creator of the Winnie-the-Pooh children's stories but in the two decades before he published the first Pooh book in 1926, Milne was best known as a humorist who wrote for the British satirical magazine "Punch" and as the author of 18 plays, most of which also had runs on Broadway. But those works rarely get done now, making them a great choice for the Mint Theatre Company which specializes in revivals of forgotten plays and is now presenting Milne's The Lucky One at the Beckett Theatre on Theatre Row through June 25.

Like so many plays of its time, The Lucky One focuses on an upper-class family and is set mainly in their drawing room. At its center are two brothers. The eldest is Bob, or poor Bob as everyone calls him. He's the kind of guy who's earnest and works hard but appears to everyone, himself included, as being one of life's also-rans.

That's especially so when he's compared to his younger brother Gerald, who excels at sports, at a job in the Foreign Office, when it comes to wooing women of all ages and even at being nice to Bob. But the real problem is that both brothers are in love with the same woman.

Bob met Pamela first but she was soon swept away by the more charismatic Gerald. As the play opens, Pamela and Gerald are engaged, while poor Bob is struggling to resolve a financial scandal at work that could send him to jail.

It's obvious who the lucky one is supposed to be but Milne, himself a favored son, slyly subverts that title, the tropes of the drawing room comedy and the themes of the Cain versus Abel matchup as well. In the process, he explores the nature of goodness and the burdens of the roles we're all assigned to play in our families.

If only the production were as astute. But, alas, the play seems to have overwhelmed its director Jesse Marchese, who is alternately too-heavy handed in some places and too light in others, leaving the actors shakily struggling to find the right balance for their performances.

Ari Brand, who has been nuanced in other shows I've seen him in, is totally one note as poor Bob and could have used some help in showing more than the character's petulance. Robert David Grant fares better as Gerald but still fails to convey the layered complexities that can come with being the chosen one.

Even the scenery, usually a treat at the Mint, is off-kilter. The set, dominated by an art deco staircase with a dual set of partially banistered stairs, is totally wrong for the country home of a tradition-bound aristocratic family of that period (not to mention dangerous for the actors). I suppose the staircase might have been meant to be expressionistic but I'll be damned if I can figure out what it's meant to be expressing.

The cop out would be to say that The Lucky One is just an old-fashioned play that has seen its day.  But Milne created something more emotionally enduring than that and I suspect we'd all be feeling differently if we—and Milne—had been lucky enough to get a more percipient production.

Labels: The Lucky One