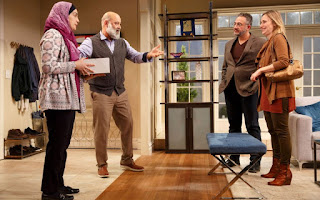 The Profane has also given its seven-member cast the rare chance to stand center stage (click here to read a group interview with them).  Not one of those actors has appeared in a Playwrights Horizons production before this one. Here's hoping that this isn't the last time we see them there, in other plays about Muslim life and in ones about life in general too.