The Art of Making Art in "Sunday in the Park with George" and "Tick,Tick...Boom!" 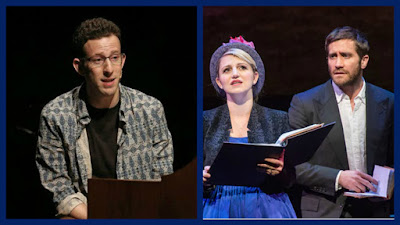 In 1984, Stephen Sondheim had already created the game-changing shows Company and Follies but, feeling disillusioned by the failure of Merrily We Roll Along, he was thinking about leaving the business when instead he wrote Sunday in the Park with George. Half a decade later in 1990, Jonathan Larson was turning 30 and feeling anxious about ever making it in the business when he wrote the show that would eventually become known as Tick, Tick...Boom!

Both shows reflect their makers' struggles with being innovative artists in a commercial world and so it was fascinating to see them within days of one another, as I did this past week when I got to see one of the four sold-out City Center performances of Sunday in the Park with George and caught the Keen Company's revival of Tick, Tick...Boom!, which has just been extended at Theatre Row's Acorn Theatre through Dec. 18.

Sunday in the Park with George won a Pulitzer Prize and heartened Sondheim enough that he went on to write Into the Woods, Assassins and Passion. The reception to his one-man version of Tick, Tick...Boom! encouraged Larson to write Rent, which won a Pulitzer of its own but famously also played its first performance on the evening that Larson, just 35, unexpectedly died from a tear in his aorta.

I'm moved each time I hear the score from either of these shows but particularly so in Tick's case because it drives home how great a loss Larson's death was for musical theater. Tick was posthumously expanded into a three-person show but its autobiographical plot remains the same as when Larson did it.

A few days before his 30th birthday, a composer named Jon tries to decide if he should give up his dream of composing music for the stage and get a regular job. The rock-infused songs run from love ballads like 'See Her Smile" to a humorous number about working the weekend brunch shift at a diner that slyly references Sondheim's Sunday.

The cast in the Keen production, staged by the company's artistic director Jonathan Silverman, isn't as starry as the one in the Encores! production I saw two years ago, which boasted Lin-Manuel Miranda, Leslie Odom Jr. and Karen Olivo. But Nick Blaemire, who bears more than a passing resemblance to Larson, is totally winning as the conflicted Jon.

Blaemire made his Broadway debut in the ensemble of Cry-Baby and then crashed and nearly self-immolated with Glory Days, the musical for which he wrote the music and lyrics and which infamously closed on its opening night.

But Blaemire, in part inspired by Larson's perseverance (click here to read his story) has persevered and he channels Larson with such authentic sincerity that his performance is as openly emotional as the best of of his idol's songs.

And although stars abound in City Center's Sunday in the Park with George (the ensemble cast includes Brooks Ashmanskas, Phillip Boykin, Carmen Cusak, Gabriel Ebert, Zachary Levi, Ruthie Ann Miles and Phylicia Rashad) but it too is anchored by the lead performances of Broadway favorite Annaleigh Ashford and the movie star Jake Gyllenhaal.

Sunday is actually a pair of linked stories. In the first act, the 19th century French painter Georges Seurat creates his masterpiece ”A Sunday Afternoon on the Island of La Grande Jatte,'' and in the second, Seurat’s namesake great-grandson, an American multimedia artist, tries to succeed in the modern art world.

It will come as no surprise to anyone who saw Ashford in her Tony-winning turn in You Can't Take It With You or as the title character in last season's Sylvia, that she is wonderful as Seurat's mistress in the first act and as the younger George's grandmother in the second.  Ashford's performance pays homage to Bernadette Peters, who played those parts in the 1984 production, but her quirky charm and plangent voice make the roles entirely her own.

Gyllenhaal, who's becoming a regular presence on the New York stage and who wowed the critics in last year's Encores! production of Little Shop of Horrors, is a terrific actor and he was wonderful as both Georges in the show's book scenes, particularly with the comic bits. He's also got a sonorous voice and clearly worked hard to master Sondheim's tricky notes.

Most critics raved. And yet, I couldn't get the sound of Mandy Patinkin, who originated the roles, out of my head. Unfair? Maybe but as both Sunday in the Park and Tick, Tick...Boom! attest, it's those little quirks that make art, art.

Labels: Sunday in the Park With George, tick, Tick...Boom!